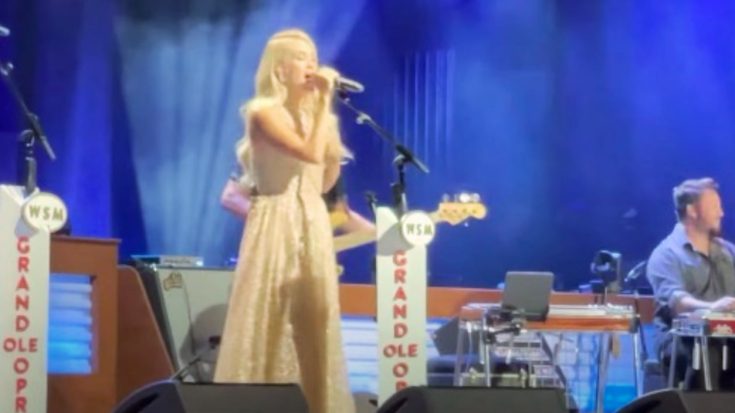 Barbara Mandrell is celebrating her 50th anniversary as a member of the Grand Ole Opry in 2022. The Opry honored her anniversary with a big celebration on Saturday (July 30).

The celebration featured tribute performances from many artists, including Linda Davis, Connie Smith, and Carrie Underwood.

Underwood was the artist who performed Mandrell’s timeless hit, “I Was Country When Country Wasn’t Cool.” The song was written by Kyle Fleming and Dennis Morgan, and Mandrell released her recording in 1981.

Mandrell took the track to the #1 spot on the Hot Country Songs chart. The song led Mandrell to a Grammy nomination in the Best Country Vocal Performance, Female category.

Mandrell announced her retirement in 1997. But she was still on hand to celebrate her Opry anniversary with her friends and the musical guests.

She thanked Underwood and the other performers in a post she shared on social media:

“To my fans, thank you for celebrating my 50th Opry Anniversary with me last evening. Whether you were there in person or watching from home, I felt so much love from each of you and I wish you could know how you made me feel…Thank you to the @opry for celebrating me and welcoming me home. Lord knows I love the Opry!“

Underwood gushed about how honored she was to perform “I Was Country When Country Wasn’t Cool” during Mandrell’s Opry anniversary celebration. She said:

“Last night, I had the honor of celebrating @barbaramandrellmusic ‘s 50th anniversary of being an @opry member. What a joy it was to sing her songs and to feel the love that her amazing fans and the other artists showered her with! Thank you, Barbara, for being you and for continuing to show us all how it’s done! Love you!“

You can watch Underwood sing “I Was Country When Country Wasn’t Cool” in the video below. She delivered a wonderful tribute to a country music icon.

Congratulations to Mandrell on celebrating 50 years as an Opry member!