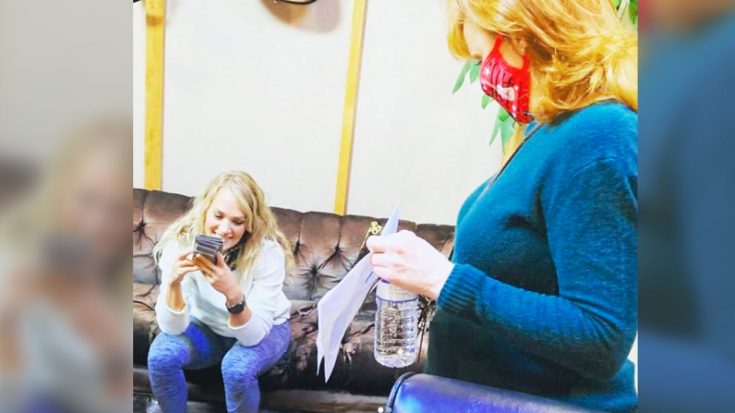 It looks like Carrie Underwood and Reba McEntire are up to something together!

The two female country superstars appeared in a photo shared by Johnny Cash and June Carter‘s son John Carter Cash. John Carter is a singer himself, but is also a well-known and respected producer in the country music world.

He has produced music for iconic artists such as Loretta Lynn, Jamey Johnson, George Jones, and Kris Kristofferson.

John Carter does his work out of the Cash Cabin Studio, which is where Reba and Carrie were at when they were recently photographed together. Teasing fans, John Carter captioned the picture with the hashtag “#secretproject.”

The photo shows Carrie seated on a couch while looking at her phone and smiling. A masked Reba stands off to the side while holding a bottle of water and a few sheets of paper in her hands. Could they be lyrics sheets, perhaps?

Their picture was part of a slideshow, which also contains a photo of Reba on her own while looking off in the distance.

You can check out the slideshow below.

Do you have any guesses on what Carrie and Reba’s secret project with John Carter could be?

No matter what Carrie and Reba are working on, this won’t be the first time the two of them have collaborated. The two artists have shared the stage several times before, most recently during the CMA Awards in 2019.

Both Carrie and Reba were hosts of the ceremony (along with Dolly Parton), and delivered a performance in ode to the women of country music. Check out a video of that performance below.

Whatever Carrie and Reba’s secret project is, we know from their past collaborations it’s going to be good!