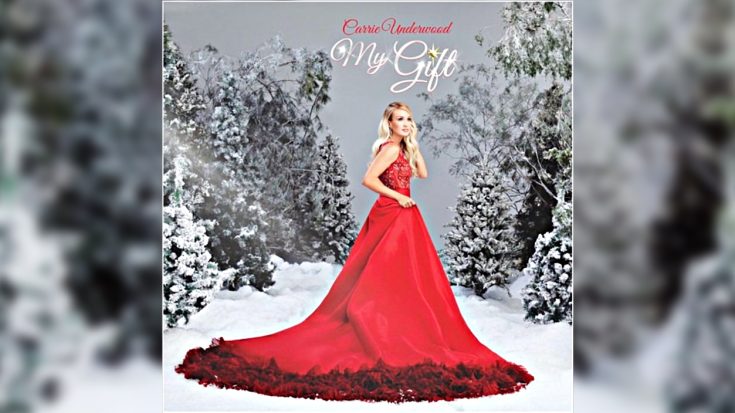 Carrie Underwood just gave us something to truly look forward to in 2020!

She has created a full-length Christmas album, titled My Gift, and it will be out just in time for the holidays on September 25, 2020.

In a short video posted to her social media, Carrie shared that creating a holiday album was something that she had always wanted to do, and this year especially just felt right.

I realize we’re in the middle of a summer heatwave, but I couldn’t wait to tell you….at long last, my very first Christmas album #MyGift is coming September 25!  So much love has gone into this and I cannot wait to share it with you! ❤️🎁 https://www.carrieunderwoodofficial.com/carrie-underwood-to-release-first-ever-christmas-album-my-gift-this-fall/

Carrie opened up the video saying, “This year it was just kind of on my heart to do this Christmas album. I just felt like it was such a fitting time, kind of feel like it’s a more perfect time than ever to record an album like this. I’ve always wanted to do a Christmas album, and it has to be something well-thought-out. So right after the Cry Pretty Tour 360 was over, this was the next step I knew I wanted to take.”

She admitted it was “really hard” to name a Christmas album, so she tried to think about the songs that were on the album as a whole, and each individual song, revealing that one of her favorites is “Little Drummer Boy.”

“Little Drummer Boy” is one of Carrie’s favorites because of the honest sentiment behind it. With video clips of Carrie’s 5-year-old son, Isaiah, with a headset on and performing in a booth with her, she shared:

“There’s a little boy and of course, I think of my five-year-old Isaiah. They’re bringing gifts to baby Jesus, and he doesn’t have anything, he’s poor. So he says, “I know, I’m gonna play my drum for him, that’s what I have.” And to me, that’s a gift that was given to him by God, his love of music, and I imagine he was a good little drummer.”

She continued to explain why she chose the title she did for the album, saying, “I love music, I love singing, that is my personal gift that I have, that I get to do, that I am so blessed to do, and I wanna use that gift, and I wanna give it back to Jesus. That’s kind of why I landed on, “My Gift” as an album title.”

Watch the video of Carrie Underwood talking about her full-length Christmas album below.