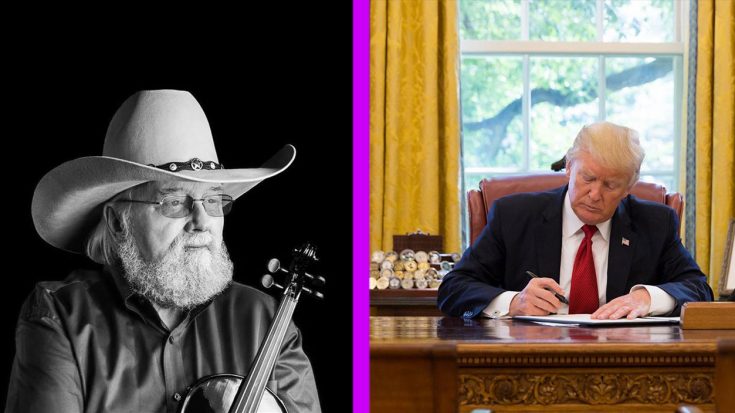 President Trump sent his condolences in a letter to Hazel Daniels on July 17, 2020.

I was saddened to learn of the loss of your beloved husband, Charlie, and send my deepest condolences.

Charlie will forever be remembered as a true American patriot, and his contributions to country music will be celebrated for generations. He inspired many Americans with his unyielding support of our brave men and women in uniform. Your husband reminded us that we must honor those who have sacrificed so much to defend our freedoms. Our great Nation depends on artists like Charlie who promote love of country. He will be greatly missed.

During this difficult time, the First Lady and I send our prayers to you, your family, and all who loved Charlie. May his music continue to reverberate in the hearts of countless Americans.”

Mr. President, we are honored that you would think of us in our time of grieving. Thank you so much, @realdonaldtrump. – Hazel and Charlie Daniels, Jr.

Daniels’ widow, Hazel, and son, Charlie Daniels Jr., thanked the president in the caption of a photo of his letter addressed to Mrs. Daniels which was posted on The Charlie Daniels Band’s social media accounts.

“Mr. President, we are honored that you would think of us in our time of grieving. Thank you so much, Donald J. Trump.”

The President had previously posted a message on Twitter following Daniels death.

We will miss GREAT Country Rocker, Charlie Daniels, who passed away yesterday in Hermitage, Tennessee. My condolences to his wife Hazel, and their family. Charlie is in my thoughts and prayers. I love his music! #RIPCharlieDaniels

Daniels has helped raise millions for veterans through his own efforts and partnerships over the years. He also established the Charlie and Hazel Daniels Veterans and Military Family Center at Middle Tennessee State University. In 2014, Charlie Daniels and David Corlew founded The Journey Home Project, a non-profit to help Veterans of the United States Armed Forces.

A true patriot, Charlie Daniels will be remembered throughout time for his impact on so many. Watch the video below to see the country legend’s memorial service.