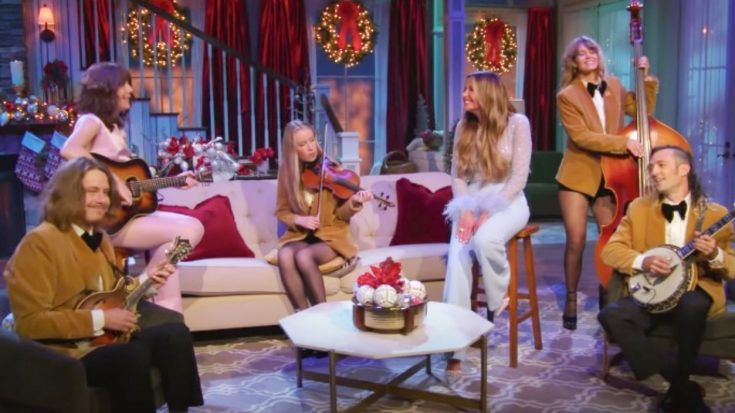 For the second year in a row, Carly Pearce served as the host of the CMA Country Christmas special. The special aired on ABC on Thursday, December 8, 2022.

“SO excited & honored to be your host again this year for @cma Country Christmas!” Pearce wrote in a social media post before the special aired.

On top of hosting, Pearce performed multiple times during the special. She opened the show with a performance of “Here Comes Santa Claus” and later sang “The Man with the Bag.” Pearce also teamed up with Molly Tuttle for a medley performance featuring a bunch of Christmas classics.

Tuttle is a Grammy-nominated bluegrass artist and musician. Pearce has bluegrass experience as well, since she got her start performing bluegrass music as a teenager.

So it only made sense for Pearce and Tuttle to sing bluegrass versions of the Christmas songs they included in their medley. Those songs were “It’s Beginning to Look a Lot Like Christmas,” “Let It Snow,” “God Rest Ye Merry Gentlemen,” and “Winter Wonderland.”

The duo fittingly chose to end the medley with a performance of “Christmas Time’s A-Comin’.” The song was originally recorded by Bill Monroe in 1951, and has been a bluegrass and country staple ever since.

Watch Pearce and Tuttle’s purely bluegrass Christmas performance in the video below. We’d love to hear them sing together again one day!