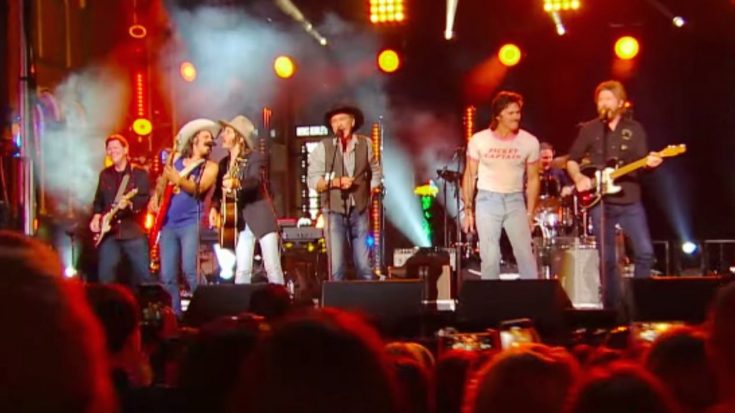 When Brooks & Dunn announced in 2019 they were releasing their first new album together in 12 years, fans lost their minds. While the record doesn’t contain new music like people were surely hoping for, it’s still one rockin’ piece of work.

Titled Reboot, the album contains updated renditions of some of Brooks & Dunn‘s most iconic songs, including “Neon Moon,” “Brand New Man,” and “Believe.” In addition to updating the songs, the Country Music Hall of Famers invited modern stars to join them on the songs.

Some of the featured artists include Kacey Musgraves, Luke Combs, and Cody Johnson.

Another featured artist on the record is the trio Midland, known for their smash hit “Drinkin’ Problem.” With a naturally traditional-leaning sound, the group was the perfect fit for Reboot.

They were tasked with singing what is arguably Brooks & Dunn’s most recognizable song, “Boot Scootin’ Boogie.” The track was so popular that it helped reignite the line dance craze in the U.S., and the craze continued for years long after the song’s release.

If you love “Boot Scootin’ Boogie” as much as the next person, you have no need to be concerned about the updated rendition that appears on Reboot. They didn’t switch up the style as much as some of the other tracks on the album, and Midland’s lead singer Mark Wystrach and Ronnie Dunn take turns singing lead throughout.

While Brooks & Dunn chose to release a few songs ahead of the album’s debut, “Boot Scootin’ Boogie” was one track they kept under wraps. They finally released the official audio when the album dropped, giving fans the first chance to hear the updated version.

A few days later, the duo decided to treat their fans to a live rendition of the reimagined track when they joined Midland for an appearance on CMT Crossroads. This live performance not only gave people the chance to appreciate the artist’s vocal talents, but their instrumental talents as well!

And by instrumental talents, we’re specifically referring to the mad harmonica-playing skills showcased by Kix Brooks throughout the performance. When he wasn’t busy singing his harmony parts on the chorus, Kix strolled around the stage while wailing away on his harmonica.

Kix definitely stole the show that night…you couldn’t keep your eyes off of him!

You can watch Mr. Brooks show off his harmonica skills by tuning in to Brooks & Dunn and Midland’s live performance of “Boot Scootin’ Boogie” below.

What do y’all think of the updated version of the song? It makes us want to boogie just as much as the original recording did!