Brooks & Dunn Say Merle Haggard Convinced Them To Get Back Together 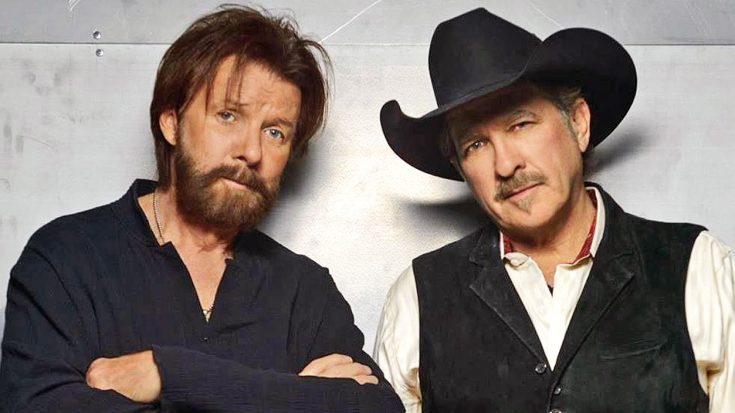 One of the best-known duos in the history of country music has recently been inducted into the Country Music Hall of Fame – and with that induction came some stories of their time living the life as country stars.

Brooks & Dunn have been churning out hits since they first linked up as a duo in 1990. But 20 years later, in 2010, the pair made an announcement that many people had feared – they were splitting up and going on an indefinite hiatus.

“As a duo, there was always a certain amount of compromise that came with making records, etc. Ronnie evolved as a dynamic singer. For me, did I really want to be a side guy playing guitar? I had always had bands growing up. Obviously from a success standpoint, it was extremely rewarding, but at some point, it comes with so many compromises you step back to question, what am I really doing here?” Brooks told People.

They, having been longtime friends and fans of Merle Haggard, welcomed him as the opening act to their farewell tour for the final two weeks – but Merle had some questions once he was out on the road.

“I went up there one night to get our song,” Brooks recalled, according to PopCulture. “Merle was in the back and he’s staring out the window; we were in Woodstock, New York. He said, ‘Sit down.’ I did and he said, ‘What’s wrong with y’all?’ I said, ‘I don’t know Merle. What’s wrong with this?’ He said, ‘Look out there. How many people is that?’ I said, ‘I don’t know. They told me it’s like 20,000 people Merle.’ He said, ‘Yeah. Why would y’all quit?'”

Just a few years later, in 2015, and Brooks met up with Merle again – this time for an interview on Merle’s new album for Brooks’ radio show, American Country Countdown.

“It wasn’t too long before Merle passed,” Brooks said. “He made another record and I was interviewing for the Countdown show. We had a good talk about his project and he still likes making music and all that. He finally went, ‘You and Ronnie getting back together?’ I said, ‘I don’t know Merle. We’re having fun spending time with their families. We’re doing stuff we enjoy.’

“He said, ‘You don’t understand, son,'” he continued. “‘You boys have got a thing. You’ve got a thing. You can’t put your finger on it … It’s one thing when an artist, somebody believes in has a thing and people know what. But for groups and for duos, it’s a rare thing. And y’all got one. You got a thing man, you cannot waste that. You need to call up Ronnie Dunn and y’all need to figure this out.’ I said, ‘Yeah Merle, whatever.’ I sent Ronnie that clip.”

Clearly, this moment with their hero and friend had an impact on them both. The pair reunited shortly thereafter and announced a Vegas residency series with the one and only Reba McEntire.

Now, they are officially Country Music Hall of Famers – and we couldn’t be more happy to see them back together and performing again.