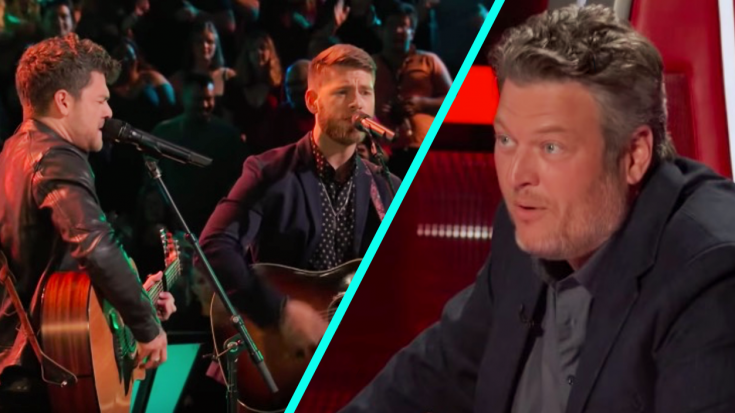 It’s never easy for Voice coaches to pick the winner of a battle performance. That choice is made all the more difficult when they turn to their fellow coaches for advice on who to choose, and they can’t offer an opinion.

That’s exactly what happened after Team Blake‘s Cory Jackson and Zach Bridges battled on Season 17 of The Voice. They performed one of the most iconic songs in country music history…Toby Keith‘s “Should’ve Been A Cowboy.”

Country fans have been singing the song at the top of their lungs ever since its release in 1993. It also happens to be a favorite of Voice coach Kelly Clarkson, who proclaimed how much she loved it as soon as the Team Blake battle kicked off.

Clarkson was on her feet in an instant, and remained standing throughout the performance. Not only was she standing, she was dancing along the entire time!

So once the battle wrapped up, it was obvious that Clarkson wasn’t going to offer much help. She immediately praised the performance, saying it was “so good” and telling Jackson and Bridges they should form a duo.

She then turned to Blake Shelton, telling him, “You’re screwed!” In other words, she had no idea how he was going to pick a winner.

John Legend advised Shelton to choose Bridges, while Gwen Stefani said her pick would be Jackson. Then when things came around to Clarkson again, she maintained that there was no real winner.

She once again encouraged the pair to consider becoming a duo, and drew a comparison between them and Country Music Hall of Famers Brooks & Dunn.

The best-selling country duo of all time 'boot scoot' into the Hall Of Fame! @BrooksAndDunnhttps://t.co/vZ33fJn9rg

When Shelton finally got to express his own thoughts, he made it clear that Clarkson was no help at all. “As always, Kelly contributed absolutely nothing,” he said.

Still, he admitted there was no real winner of the battle, since he was impressed with both artists. But he had to pick a winner, and he decided to side with Legend’s opinion and chose Bridges.

Now it’s time for you to see if Shelton made the right choice by tuning in to Bridges and Jackson’s “Should’ve Been a Cowboy” battle below. We do think Clarkson is on to something…the two of them should team up and form a duo!