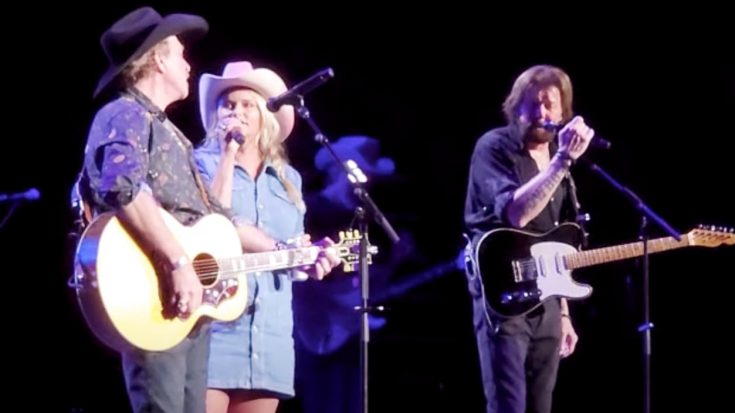 Brooks & Dunn‘s Reboot Tour took them to Nashville’s Bridgestone Arena on June 18. Country fans packed in the arena to listen to the Hall of Fame duo sing their signature songs such as “Red Dirt Road” and “Boot Scootin’ Boogie.”

One of those audience members just so happened to be Miranda Lambert. She was having a blast listening to Brooks & Dunn’s show while having a few drinks with her friends.

When Ronnie Dunn heard that Miranda was in the crowd, he asked her to come up on stage. She joined him and Kix Brooks in singing the end of “Cowgirls Don’t Cry.” Brooks & Dunn released the song as a collaboration with their good friend Reba McEntire in 2007.

Having a great time at the brooks and Dunn concert…and Miranda showed up. Darius Rucker before that show and Tyler Braden as an opening act. One of the best concerts since being in Nashville. @KixBrooks @RonnieDunn @mirandalambert pic.twitter.com/TG9ZUUINDE

After she sang “Cowgirls Don’t Cry,” Miranda prepared to leave the stage and go back to her spot in the crowd. But then she heard Brooks & Dunn start playing “Neon Moon” and she knew she couldn’t leave.

She jumped in and started singing “Neon Moon” with them too. Ronnie was impressed, considering the fact that Miranda’s performance was entirely impromptu.

“That’s not fair to Miranda, but Miranda can walk out here and do anything unrehearsed,” Ronnie said. “It’s all about being real.”

Ronnie went on to “swear” that Miranda “had no idea” he was going to ask her to join him and Kix on stage. She backed him up, saying, “I woulda worn my fishnets and Spanx if I woulda known!”

Watch Miranda’s unexpected performances of “Cowgirls Don’t Cry” and “Neon Moon” with Brooks & Dunn in the video below. Miranda comes on stage around the 3:40 mark in the video.