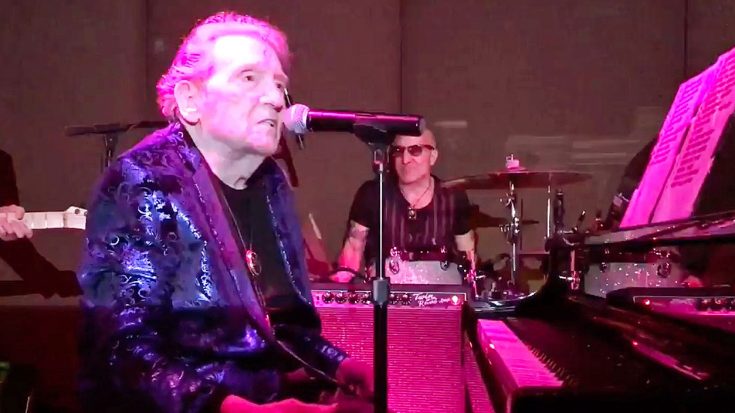 One of the biggest musical sensations to come from the 50s rock ‘n roll era has suffered a stroke at the age of 83.

An icon known for his hits like “Whole Lotta Shakin’ Goin’ On,” “Great Balls of Fire,” and “High School Confidential,” Jerry Lee Lewis was a pioneer during one of the most memorable parts of musical history.

Along with the likes of Elvis Presley, Lewis made some of his very first records at the famous Sun Records studio in Memphis, Tennessee. His first single “Crazy Arms” sold more than 300,000 copies in the South before “Whole Lotta Shakin’ Goin’ On” really skyrocketed his career to new heights.

While Lewis has had incredible success in nearly every single genre he’s tried his hand at, it’s his unforgettable early years and hit song “Great Balls of Fire” that reminds us how lucky many are to have grown up with a legend like Lewis still producing new music.

I just heard a few minutes ago that Jerry Lee Lewis, one of the last men standing, one of the last of the rock n rollers suffered a minor stroke. He is in my thoughts and prayers right now, and I wish him a healthy recovery. pic.twitter.com/TDMPZwWryM

A representative for the musical legend took to Facebook to share the news of Lewis’ stroke with fans and give them an outlook on his recovery.

“Last night, Jerry Lee Lewis suffered a minor stroke. He is with his family, recuperating in Memphis and the doctors expect a full recovery. The Killer looks forward to getting back to the studio soon to record a Gospel record and on the road performing live for his fans. His family requests privacy at this time. Well wishes and prayers are greatly appreciated.”

Along with many within the country and rock music industries, we are praying for Lewis during this time of need and are looking forward to a speedy recovery.

Read his statement posted to social media below and watch one of his spitfire performances of “Great Balls of Fire,” too.