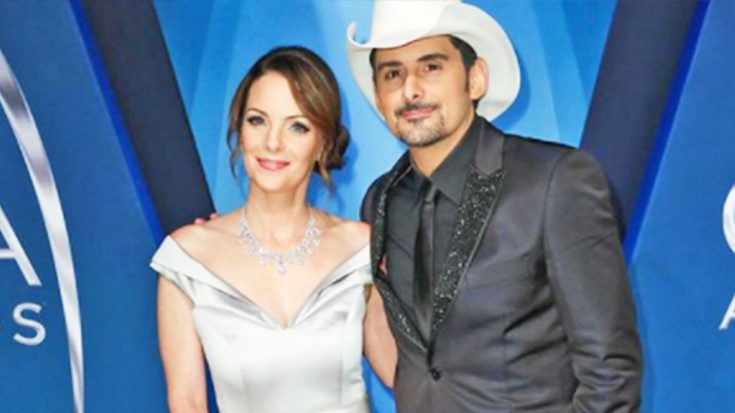 Over 15 years ago, Brad Paisley married the woman of his dreams, actress Kimberly Williams. He first saw her while he was on a date with another woman. They went to see Kimberly’s movie Father of the Bride, and afterwards, Brad thought he should marry a woman just like Kimberly – and he eventually did!

They began dating in 2001 and were married on March 15, 2003 at Stauffer Chapel on the campus of Pepperdine University in Malibu, California. The couple is known for their loving relationship, but also for their incredible sense of humor!

They often post silly photos together and really like to dress up for any occasion whether it be for Halloween or a good cause like ending Alzheimer’s.

So…I roped @bradpaisley into doing disco for a good cause. Come join us! #endALZ (see link in profile)

A post shared by Kimberly Williams-Paisley (@kimberlywilliamspaisley) on Apr 14, 2017 at 3:13pm PDT

Happy birthday to my Batman @bradpaisley 🎃 P.S. He made the mask for me out of card board FYI #whataguy

A post shared by Kimberly Williams-Paisley (@kimberlywilliamspaisley) on Oct 28, 2017 at 7:01pm PDT

Since they are most known for their funny bones, it’s no surprise that Kimberly went the silly route when wishing her husband a happy anniversary on social media.

“This is a man who unflinchingly married me on the Ides of March 15 years ago today. Isn’t he cute? Love you, honey,” she captioned a photo of her making a very silly face, and Brad looking like he’s about to burst into laughter.

This is a man who unflinchingly married me on the Ides of March 15 years ago today. Isn’t he cute? Love you, honey. 📷 by @mandyjohnsonphoto

A post shared by Kimberly Williams-Paisley (@kimberlywilliamspaisley) on Mar 15, 2018 at 6:52am PDT

If you thought that was funny, wait until you find out what Brad did for her the morning of their 15th anniversary! He wrote “Happy Anniversary” on the toilet seat, which Kimberly happily displayed on her Instagram Story.

Brad’s funny, yet “romantic” act is referencing his song “Ode De Toilet (The Toilet Song),” which he often plays at live shows and says he wrote for his wedding. In the song, he sings, “If I want to show her how much I adore her/The best way I’ve found/Is to make sure when I’m finished/I put that toilet seat down,” and “If you want to say ‘I love you’/Then put that toilet seat down.”

So, according to the song, he really was being romantic by putting the toilet seat down and writing “Happy Anniversary” on the lid!

Watch Brad perform “Ode De Toilet (The Toilet Song)” in the video below.