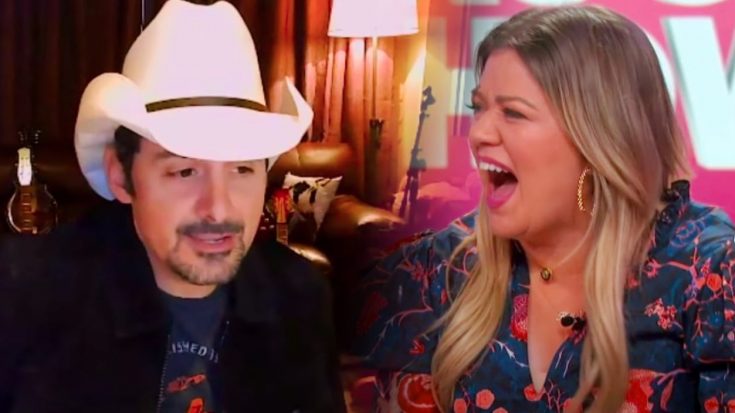 Brad Paisley has been happily married to Kimberly Williams-Paisley since 2003. But he still knows how horrible it feels to be single on Valentine’s Day!

With the day of love fast-approaching, Brad decided to dedicate a comical song to all of the single people out there. He shared this funny tune when he made a virtual appearance on Kelly Clarkson‘s talk show, The Kelly Clarkson Show.

Kelly prompted Brad to share the song, which he wrote to get the message out about Singles Awareness Day. This isn’t a pretend holiday…it’s an actual thing!

Brad was more than happy to share his song about Singles Awareness Day, telling Kelly, “We need this cause I’m sick of this being just for people that are in love.”

From there, Brad moved in to singing his hilarious ditty. The two opening lines got a big laugh out of Kelly:

“Are you tired of sitting on your couch eating Pringles? It’s been a while, since your heart had a tingle.”

Brad then sang about how single people shouldn’t be upset about being alone on Valentine’s Day. Instead, he encouraged them to tune in to NBC that night to watch the Opry’s 95th anniversary celebration (which he co-hosted with Blake Shelton).

That sounds like a splendid way to spend Valentine’s Day…single or not! Kelly agreed, saying, “That one fits me, that one fits me quite well.”

Tune in to the video below to listen to Brad’s silly song about being single. He always knows how to make people laugh!