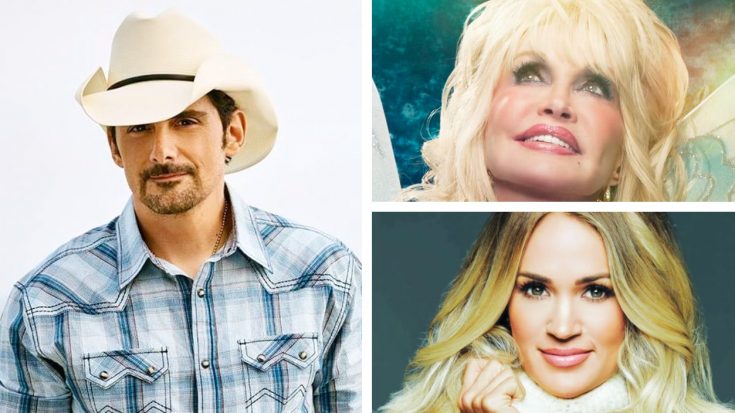 Brad Paisley has a new song, and is using it to pay respect to some of country music’s outstanding female artists.

The song, titled “Off Road,” celebrates a woman who paves her own path, rather than taking the road people expect her to travel on. As some of the lyrics go:

“Now where she’s goin’ ain’t paved,
She ain’t lookin’ for a highway.
And she ain’t gonna stay in her lane,
‘Cause she’s a little off road.”

Paisley further explained the meaning of the song while speaking with CMT, saying it’s “…about every girl that won’t stay in her lane, every girl that busts through roadblocks to get where she wants to go.”

Paisley co-wrote the track with Ross Copperman and Lee Miller. As they were working on the tune, Paisley’s female colleagues in country music immediately came to mind.

Because of this, he told Music Mayhem he dedicates “Off Road” to trailblazer female artists in country music such as Dolly Parton and Carrie Underwood:

“It’s really about female empowerment and the way that women will bust through road blocks. You can’t keep a country girl down, she is just going to go off the beaten path and do the thing she needs to do to change this world. It’s about trailblazers, and I hope people relate to it” he said. “…I just think the track has got something magical about the fact that women, especially country women- When I think of this song I think of people like Dolly Parton and Carrie Underwood and Tammy Wynette and Loretta Lynn and just the strong, long list of females that blazed their paths. This is for them.“

Paisley hasn’t released a music video for “Off Road” yet. But you can tune in to the video below to watch him deliver his debut performance of the song on The Kelly Clarkson Show.

If Paisley does create a music video for “Off Road” in the future, we’d love to see it feature the women the song honors, such as Parton, Underwood, and Lynn!