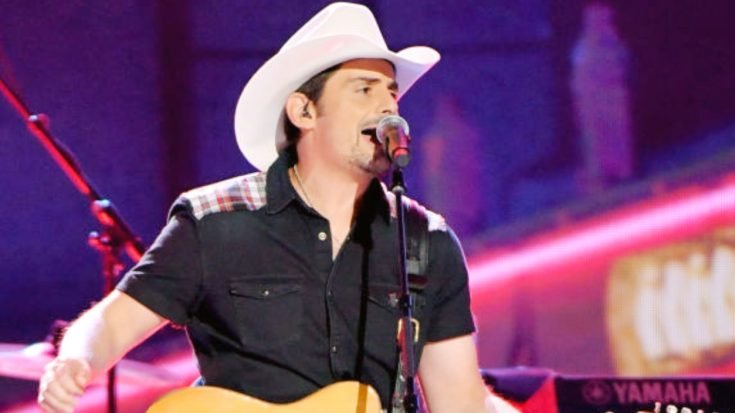 Fans Wonder What Brad Will Bring To CMA Awards

Brad Paisley was working double duty at the 2018 CMA Awards. In addition to serving as the ceremony’s host for the 11th year in a row alongside Carrie Underwood, Paisley was also tapped as one of the night’s performers.

Understandably, fans couldn’t help but wonder what Paisley would be singing. After all, he hadn’t released a new single since 2017’s “Heaven South.”

Released in October 2017, “Heaven South” was the third and final single off of Paisley’s chart-topping album, Love and War. The extensive album also contained the hit songs “Last Time For Everything” and “Today.”

The latter of those two songs was the album’s biggest success, reaching the third spot on the U.S. Country Airplay chart.

So when it was first announced that Paisley would be performing at the CMA Awards, a number of fans surely thought he’d perform another track off of Love and War, or maybe even a classic country cover.

But it turns out he had something else in mind!

Just two days before the awards, Paisley started teasing something on social media that sent his fans into a frenzy. The first tease came in the form of a still image he shared, which showed a guitar-slinging cowboy riding a bucking bull.

All the caption said was “Bucked Off – Tomorrow,” referring to the date before the CMA Awards.

A second image, much like the first, was shared a little while later. Only this one moved, was neon in style, and featured the words “Bucked Off” above the image.

In case y’all didn’t figure it out by now, “Bucked Off” is the name of Paisley’s latest single, which wasn’t a song on Love and War.

Within the caption, Paisley sort of explained what “Bucked Off” is all about. He described the song as such, saying it is “Turbo twang retro-futuristic rockin’ hi-fidelity country music…”

In an interview with SiriusXM‘s Storme Warren, Paisley explained exactly what fans could expect to hear out of “Bucked Off.” He described it as being “honky-tonk” in style, and says it throws it back to the more traditional country sound he grew up on.

He also promised that the song would showcase his famous funny side, and said that it’s a lighthearted take on a typical breakup song.

Finally, Paisley debuted “Bucked Off” during the CMA Awards, and it was exactly as he described, with a little rock and roll thrown in for good measure. The track surely had viewers jamming out at home.

Y’all can certainly agree with that! Watch Paisley debut “Bucked Off” at the 2018 CMA Awards by tuning in to the clip below.

This performance from @BradPaisley bucked off all the others from the stage! #CMAawards pic.twitter.com/aDMOQdKeqr