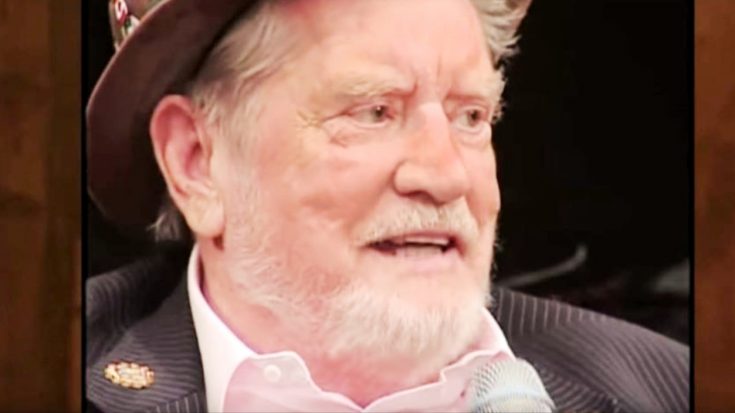 A video from Country Road TV brought back memories and reminded us all the importance of living life well. As Boxcar Willie belted out “Life Is Like A Mountain Railway”- better known as”Life’s Railway To Heaven”- you can feel how passionate he was in his own life…

Born in Texas as Lecil Travis Martin, he was well known and loved by many. In the 1950s, he served in the US Air Force as a B-29 flight engineer during the Korean War. His stage name “Boxcar Willie” actually developed as a result of his time in the service.

While at a railroad crossing, he saw a man sitting on the boxcar that looked identical to his chief boom officer- Willie Wilson. Instantly, he grabbed a pen and wrote down the lyrics to his first ballad, “Boxcar Willie.” Later, he adopted the name for himself when he performed at a California talent show. Winning first place, the name seemed lucky enough to stick.

Boxcar Willie continued to sing part time while serving his country. It wasn’t until 1976 that he retired from the military and began performing full time. By this time, he had already gained a small following and quickly became “America’s Favorite Hobo.” He topped the charts in the US – and even making it to #5 in the UK on their pop charts!

At the age of 54, Boxcar Willie decided to purchase an inn and theater in Branson, Missouri where he would set up permanent residence and continue singing for fans.

Just as Boxcar Willie has his history, the song he chose to play for this Country Road Tv episode has its own story. The song was written in 1890 by famous gospel songwriter, Charles Davis Tillman. At the time, he titled it “Life’s Railway to Heaven” but audiences quickly came to know it as “Life Is Like A Mountain Railway” – based on the opening lyrics.

Tillman was known for taking traditional gospel songs and blending them with the modern tunes and lyrics of the time. “Life Is Like A Mountain Railway” was no exception. The chorus was taken from an old Mormon poem “Truth Reflects Upon Our Senses” by Eliza R. Snow.

Boxcar Willie makes the century-old song’s message very clear. Surrounded by fellow friends and singers, his voice rings out in a gospel tune saying “Thou wilt guide us/Til we reach that blissful shore/ Where the angels wait to join us/In God’s praise forevermore/Life’s railway to heaven”

At the end of his performance, Boxcar Willie humbly address his audience about the song and his own life. He looks into the camera and opens up his heart saying “I just wanna tell everybody… that there is a God and my prayers were answered. I don’t know how much more time he got planned for me but I’ll treasure every second of it.”

Boxcar Willie was diagnosed with Leukemia in 1996. He continued playing music and living his life to the fullest until his passing in 1999. We might have lost this profound musician but his music and message will forever be in our hearts.

Watch him perform “Life’s Like A Mountain Highway” and listen to his words of wisdom below. For more heartfelt performances, check out and subscribe to Country Road TV‘s Youtube channel.