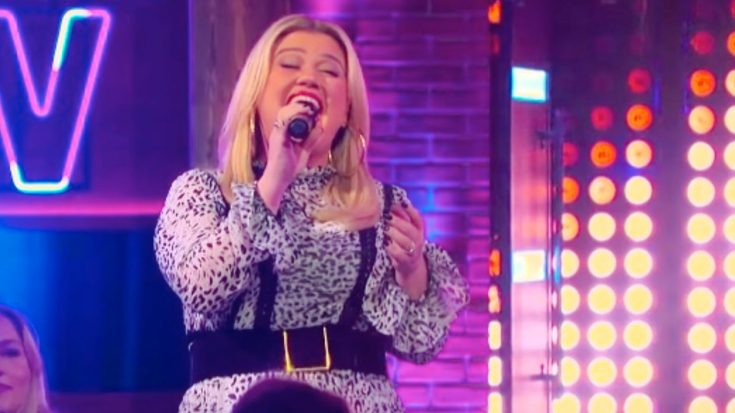 Each episode of The Kelly Clarkson Show contains a performance segment dubbed “Kellyoke.” During the segment, Clarkson performs a cover of a song she enjoys and offers her own take on it.

She has performed everything from Deana Carter‘s “Strawberry Wine” to Lady Gaga’s “You and I.”

This concept of Clarkson covering songs she loves isn’t something new. The three-time-winning Voice coach has always included covers in her concert sets.

During her 2015 tour, she had fans submit their song requests. Then, she would pick a song to cover from the pool of submissions. But during one show, she took it upon herself to pick the cover on her own.

Before singing, Clarkson said the track was “Literally, probably my favorite song of all time.” That song was “Love Me Like a Man” by Bonnie Raitt.

It’s obvious that Raitt is a favorite artist of Clarkson’s, so it came as no surprise when she covered another one of her songs for “Kellyoke” on The Kelly Clarkson Show.

This time, Clarkson sang Raitt’s 1991 hit, “Something to Talk About.”

“Something to Talk About” has been covered by a number of artists through the years, including country stars. The now-defunct group SHeDAISY released their cover in 2007, and Kellie Pickler sang it while she was competing on American Idol‘s fifth season.

Like Pickler, Clarkson is an Idol alum, and also like Pickler, she delivered a standout performance of “Something to Talk About.”

The song was right in Clarkson’s wheelhouse, and gave her the opportunity to showcase her powerful voice. Those who watched her cover were amazed by it, with one fan on Twitter going so far as to say her rendition “is better than the original.”

See that and other fan reactions to her performance below.

Hot Damn that girl can sing anything❤

I don't think there is anything Kelly cannot sing amazingly!

Now, you can see what all of the fuss is about when you watch Clarkson’s “Kellyoke” cover of Raitt’s song in the video below.

We know that Clarkson can excel at singing Raitt’s music, so we hope she picks another one of her songs for a future “Kellyoke” segment.