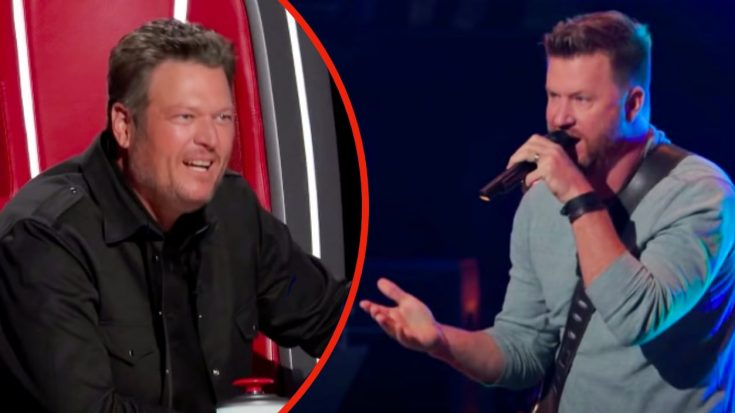 After serving as a coach on The Voice for many seasons, Blake Shelton knows a good singer when he hears one. That’s why he wasted no time turning his chair for one country singer who performed a cover of Brooks & Dunn‘s “Red Dirt Road.”

The singer who managed to catch Shelton’s attention was Florida resident Ben Allen. Surprisingly, Allen didn’t discover his love for music until later in life, at age 30. Now 42, Ben has gone on to become a popular artist in his home state, and is the lead singer and rhythm guitarist for the Ben Allen Band.

Those who heard Allen sing on The Voice without knowing his backstory would have assumed he has been singing his whole life. His voice has a refined quality to it that can’t be denied.

Allen only had to sing two lines of the song to win Shelton over. Just seven seconds into the performance, Shelton flipped his chair around to show he wanted Allen for his team.

The other coaches were clearly amazed as well. In the end, John Legend and Gwen Stefani also turned their chairs.

It only takes 7 seconds for @BlakeShelton to turn his chair for @BenAllenband. ? #TeamBlake #VoiceBlinds pic.twitter.com/V6Ixizy15x

Even though Kelly Clarkson didn’t turn for Allen, she let him know he had a lot of talent. “You’re going to kill it and probably go to the finale,” she said.

Stefani zeroed in on the quality of Allen’s voice, telling him his voice was so clear he “sounded like a record.”

Shelton also complimented Allen’s voice, telling him he sounded like an “old-fashioned” singer.

While both Stefani and Legend made good cases for themselves, Allen decided to join Team Blake. Shelton was excited to have him on his team, telling the cameras:

“He’s edgy but he’s traditional and he’s everything that the core of country music fans love.”

Check out the video below to watch Allen’s rendition of “Red Dirt Road” so you can understand why Shelton immediately turned his chair for him!