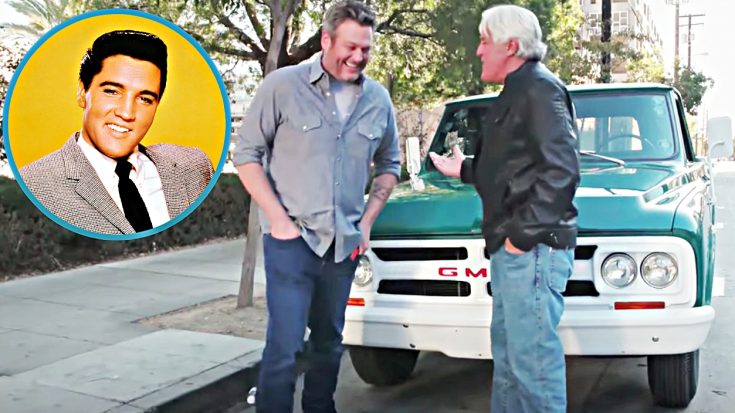 In an episode of “Jay Leno’s Garage” that aired on May 19, 2020, Blake Shelton drives a 1967 GMC truck that was previously owned by Elvis Presley.

At the beginning of the show, Leno pulls up in the teal GMC truck while Shelton patiently waits on the sidewalk. Leno gets out of the truck and greets Shelton, admitting that he knows Shelton is not a huge car guy, however, he does like old trucks. Shelton agrees and says he loves trucks, and that’s all he owns, as he adds on that the very first truck that he ever had in his life was a GMC. He admits that he’s never driven a truck this old, referring to the truck Leno brought him to drive when Leno quips, “But you’re no kid anymore, you know this way, old guy-old truck.” Shelton laughs and jokes saying, “I already hate this show,” as he climbs in the driver’s seat.

As they drive, the two chat about Shelton being 15 when he started getting serious about playing music and the support he had from his parents saying, “My parents, they both knew that my only shot at anything was going to be music because I just terrible in school, terrible grades.”

Shelton shared with Leno how he did the Elvis Tribute Special in 2019. Leno asks him why he was asked to be a part of the show, wanting to know if it was because he was a fan, or just that he was the guy to do it? Shelton jokes saying, “They were just looking for a current artist that can read.” They both laugh and Leno asks him if he is a big Elvis fan, and Shelton replies, “Oh my God, of course!”

Leno shares that was another reason he wanted him to drive that truck. Leno shows the paper revealing that the truck Shelton is currently driving was owned by Elvis Presley and that he used it to drive around his Circle G Ranch in Horn Lake, Mississippi. Shelton was shocked and almost couldn’t believe it!

Leno took Shelton to historical spots of Elvis Presley including a recording studio where he recorded the songs “Jailhouse Rock” and “Love Me Tender” and a restaurant called Formosa Café where Elvis used to eat his favorite meal, peanut butter, banana and bacon sandwiches. The two went inside the restaurant to eat, and Leno made Shelton try Elvis’s favorite meal, while he enjoyed a nice juicy steak.

Watch the full clip from the show below!