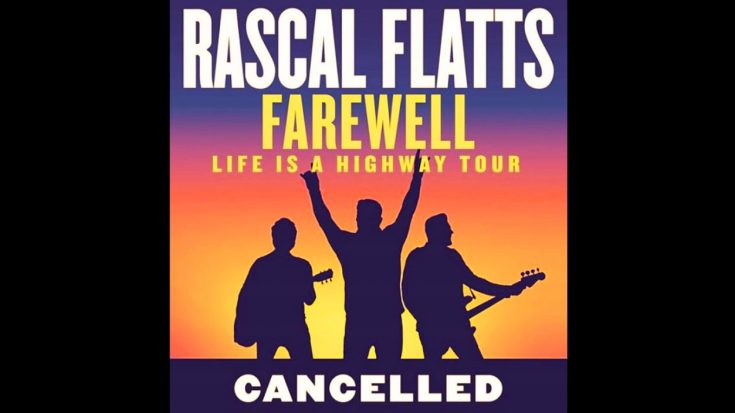 In January, Rascal Flatts dropped a bombshell announcement when they revealed their plans to embark on a Farewell Tour this year. They shared the news during an appearance on CBS This Morning and in a statement on social media.

“When we started out 20 years ago, we could not imagine all of the people, places and gifts we would encounter. As we head out on the Rascal Flatts Farewell – Life is A Highway Tour, there is no sadness. Just new chapters, new journeys, and new beginnings,” read the statement.

Citing the need for a break as the reason they wanted to say “goodbye” for now, members Gary LeVox, Jay DeMarcus, and Joe Don Rooney made it clear there was no bad blood between the three of them.

“We’re not gonna sign some pact that says we’re never gonna tour again or something like that,” DeMarcus said on CBS This Morning. “We all still love each other.”

The Farewell Tour originally had 25 stops when it was first announced. Rascal Flatts later added 11 additional concerts to their schedule, and announced the last show would be held in Nashville on October 30.

A number of special guests were set to join Rascal Flatts at various tour stops, including Chris Lane and Chase Rice.

What makes a road trip even more fun? Bringing friends along! Excited to announce the addition of @iamchrislane, @chaserice, @avenuebeat, @cayleehammack, @kingcalaway, @mattstellmusic and @rachelwammack to select dates on the #RascalFlattsFarewell Tour. We’ve also added new shows, including hometown stops in Columbus and Nashville! Tickets are on sale this Friday, February 21 at 10AM local time at RascalFlatts.com

Fans were eagerly anticipating the kickoff of Rascal Flatts’ final tour on June 11. But when the COVID-19 pandemic broke out, Rascal Flatts and other artists began postponing concerts out of concern for their fans’ safety.

On March 20, Rascal Flatts announced they would be postponing all June dates of the Farewell Tour until August “out of an abundance of caution.” The group seemingly remained hopeful that the tour would be able to continue later in the summer.

Now, two months later, Rascal Flatts and other artists have realized that it may be some time before it will be advisable to hold large events such as concerts. Over the course of the past few days, artists such as Chris Stapleton, Reba McEntire, and Kenny Chesney have all postponed their 2020 tours until 2021.

Rascal Flatts followed suit on May 19. But fans were shocked to hear that the trio chose to cancel the tour instead of postponing:

“Flattheads, after a lot of difficult conversations that we never thought we would be having, we have decided that in the interest of the safety of everyone involved we will not be moving forward with our Farewell Tour,” read a statement on the band’s official social media pages.

Flattheads, after a lot of difficult conversations that we never thought we would be having, we have decided that in the interest of the safety of everyone involved we will not be moving forward with our Farewell Tour.  Refund information is available at livenation.com/refund. 2020 is still an important year for us as a band and a milestone we want to celebrate with our fans, so please stay tuned for some fun surprises coming your way soon!  We love you and can’t thank you enough for being on this journey with us! Thank you for understanding. Stay safe, Rascal Flatts.

LeVox and DeMarcus shared the news on their personal accounts, with LeVox saying he was “at a loss of words,” concerning the cancellation.

DeMarcus had an equally emotional response, writing, “Our hearts are simply broken, this is not the way we ever dreamed our 2020 would go…”

Even though the trio has chosen to cancel their Farewell Tour, they still plan to make this year special for their fans. They told everyone to “stay tuned for some fun surprises coming your way soon!“

Those who already purchased tickets for a concert on the Farewell Tour can obtain refunds through livenation.com.

We’re sad to hear that Rascal Flatts had to cancel their Farewell Tour, but certainly understand why it had to happen.

Even though we can’t see them on tour this year, you can enjoy one of their quarantine performances in the video below. They sang with “Garbage Man” Doug Kiker on the American Idol finale, and it was a performance worth remembering.