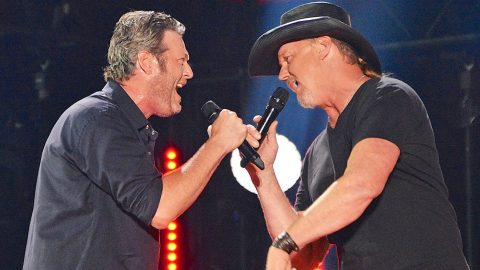 Everyone’s favorite dynamic duo is back, and they have a new song to share!

During the early years of Blake Shelton‘s career, Trace Adkins took him under his wing and became a mentor of sorts to him. The two developed a close bond, and it only seemed like a matter of time before they’d release a duet together.

That duet came in 2009, and was titled “Hillbilly Bone.” The rowdy track has Shelton and Adkins singing about how each person has a little bit of hillbilly in them, no matter how hard they try to hide it.

The duo came together for the song’s hilarious music video, which shows them crashing a fancy dinner party and turning it into a country jamboree.

As you would expect, the song was a smash hit. It topped the Hot Country Songs chart and crossed over to claim the 40th position on the Billboard Hot 100.

Now, even ten years after the song’s release, fans still go crazy whenever Shelton and Adkins get together to sing it live. So we’re sure plenty of y’all will be excited to hear that the pair is gearing up to release a brand-new duet later this week!

Shelton told Taste of Country and other media that he thought he was done recording for a while when he heard the song, and it sent him back into the studio.

“Everything is icing on the cake for me at this point,” Shelton said, “and all I want to do is make the records that I want to make with the people I want to make ’em with.”

Clearly he wants to make music with Adkins.

“The guy’s got so much personality in his voice and the way he sings,” Shelton said of his longtime friend in a press release about the song, “and I still think he’s one of the most underrated vocalists out there.”

If you’re excited to hear Shelton and Adkins reunite on their new duet, you don’t have to wait too long to hear it. The song is due to drop digitally on Friday (August 16) and will begin radio airplay on Monday (August 19).

Get yourself hyped up for the release of “Hell Right” by watching one of Shelton and Adkins’ energetic live performances of “Hillbilly Bone” below.

Based on how successful Shelton and Adkins’ past collaboration was, we have a feeling they may have another chart-topping hit on their hands!