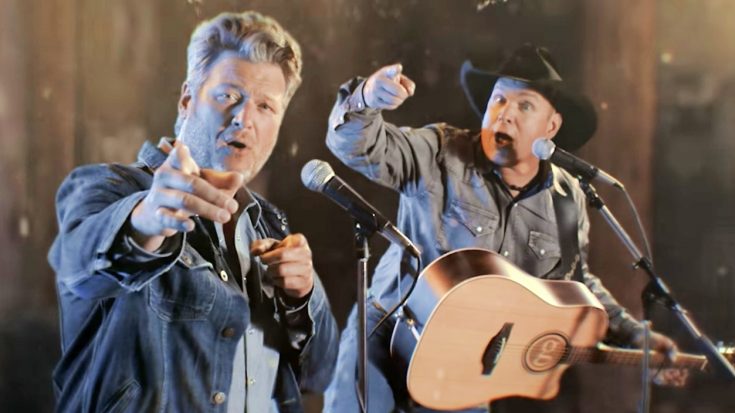 Entertainment Tonight‘s Nancy O’Dell was interviewing Brooks in Shelton’s Nashville location of his bar Ole Red when he spilled the beans during CMA Fest week.

“Well, there’s a reason we’re here at [Shelton’s bar] Ole Red,” he told her. “The whole reason with Blake Shelton is, Blake and I are getting ready to release a duet for the summer!“

Later in the day, Brooks also confirmed they would be filming a music video, which would be his first in ten years.

#DiveBar will be the first music video in ten years… and there is no one else I’d rather do it with than Blake!! Can’t wait to perform it live with you Friday night in Boise! love, g

After months of anticipation, Brooks and Shelton have finally released the music video, and they did not disappoint. Brooks premiered the video on his Facebook page.

It is set underwater at Ole Red and begins with the band floating down to the stage wearing scuba gear. Brooks and Shelton appear on stage, along with some dancing sharks to sing “Dive Bar.”

What do you think of the music video? Watch it below.