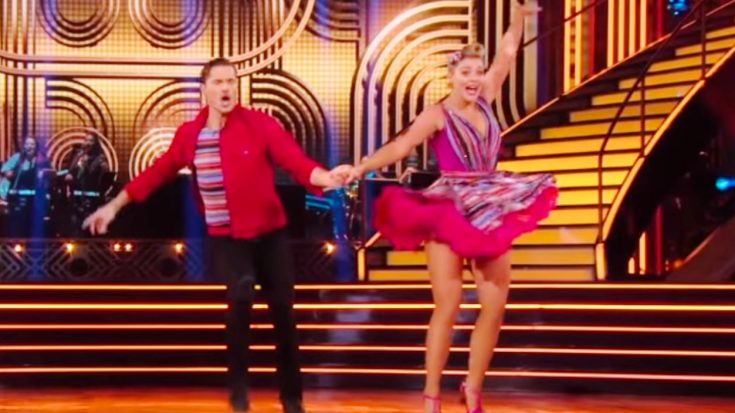 Following her Halloween-themed Argentine tango during Dancing with the Stars‘ Halloween night, Lauren Alaina revealed she has been dancing with an injured rib since week one of the show. She told host Erin Andrews that she fractured one of her left ribs during the first week, and has since injured three others.

At that time, Alaina was not sure if the other ribs were fractured as well, but admitted, “they don’t feel great.”

Alaina pushed through the pain and earned a score of 27 for her Halloween routine, making her one of the top scorers of the night. The routine helped her make it through to the next round of the competition.

Before her next dance, Alaina opened up on social media about how challenging the whole DWTS process has been. Sharing a photo of herself hugging her partner Gleb Savchenko, she wrote:

“No pain. No gain. We are pushing through and doing our best for y’all this week. Who needs healthy ribs when you get good hugs from Gleb when you need them?”

Alaina admitted that her DWTS journey has not been an easy one. “It has tested me mentally, spiritually, and physically,” she wrote

But she knows the whole experience will help make her a stronger person.

No pain. No gain. We are pushing through and doing our best for y’all this week. Who needs healthy ribs when you get good hugs from Gleb when you need them? Lol. @glebsavchenkoofficial Is the best partner in the world. He’s got my back. Literally. Being on @dancingabc has made me a stronger person in every way. It has tested me mentally, spiritually, and physically. I am so proud of how far I have come in this time. I am going to leave this experience a much better woman than when I started. Thank you, Gleb, for your patience, hard work, and belief in me. God put me exactly where He wanted me. I am so thankful for the love, support, and votes you guys have given us. Don’t forget to tune in tonight and VOTE VOTE VOTE. Text Lauren to 21523. LET’S DO THIS.

Alaina proved her strength through her next dance, which was a jive set to Elvis Presley‘s iconic song, “Hound Dog.”

Those who have watched past DWTS contestants perform the jive know that it’s one of the most challenging dances to do. It’s fast-paced and requires a wealth of precision, which is difficult enough for a completely healthy dancer to pull off.

Alaina faced an extra obstacle with her routine, since her ribs haven’t healed. Still, she managed to pull off a quick, energetic jive that impressed the judges and led to her earning a score of 24.

While her score was a few points down from the one she earned for her Halloween tango the previous week, it was still high enough to save Alaina from the bottom two and elimination. She was announced as “safe,” and was sent through to the next week of the competition.

Tune in to the video below to see the routine that helped Alaina make it through on DWTS. This danced helped her land in the Top 6!