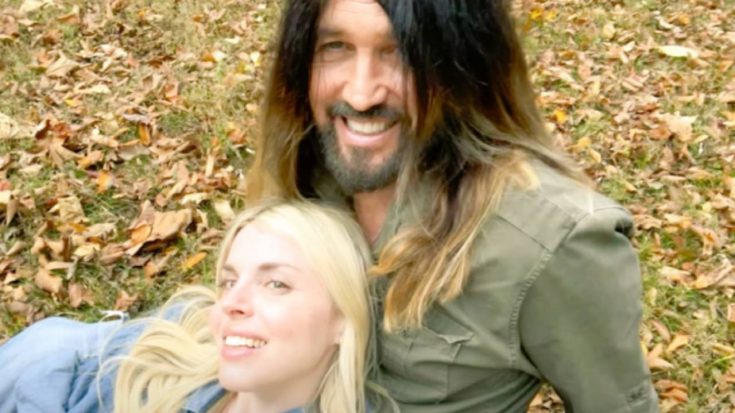 For several weeks, fans about speculated that country singer Billy Ray Cyrus popped the question to his recent duet partner, a singer named Firerose.  She has been wearing a ring on that finger in Instagram posts since September 8. You can see it in the second photo.

There was further speculation when she posted a carousel of three photos alongside the caption, “Taking in the moment.” People were even congratulating her in the comments section!

She can also be seen wearing the ring in a video Cyrus posted on October 21st announcing their new duet, “Time.”

This isn’t their first time collaborating. They previously recorded the song “New Day” together.

“Time” has finally been released and along with it, Cyrus finally confirmed that he and Firerose are engaged – and he popped the question back in August.

Firerose told PEOPLE, “Billy looked at me and said, ‘Do you, do you wanna marry me?’ And I was just like, ‘Of course I do. I love you.’ He said, ‘I love you. I wanna make this official. I wanna be with you forever.’ “

Billy Ray spoke highly of his future bride, saying, “When we began sharing the music, it just evolved more into, as musical soulmates, to soulmates, happy, pure love that to me, I didn’t know could exist. Again, we’re musicians, first and foremost, both of us. And we found this harmony, and this rhythm, this melody to life.”

While it seems the relationship is newer, the couple has actually known each other for 12 years. They met on the set of Hannah Montana, of all places.

“I loved doing that show,” Billy Ray told PEOPLE. “There’s a couple old pine trees on the lot that look like Tennessee. [My dog] Tex and I would go out there in the middle of the day and he’d take care of his business and we’d stretch and I’d think how much I missed Tennessee. On that given day, Firerose came out of the front door. There was almost a moment of, I don’t know, recognition. I was like, ‘This girl’s a star.'”

He continued, “She told me she’d had an audition and I said, “Well, I’m sure you got the job.”

But, she didn’t. And today, she doesn’t remember what role she auditioned for!

“I just thought, well, the casting agents, the producers, the writers, they’re all on the floor of where we do Hannah Montana,” he remembered. “And I actually said to her, ‘Don’t ever take a strange man up on this offer, but, in this case, Tex will testify that you will be totally safe. I’m going to introduce you to a producer and you can kind of make yourself at home and watch us rehearse and you know, maybe it might lead to a role or just another contact at Disney.’ And so, off me and her and Tex went back to the studio and I think she met a lot of the cast and met the producers, writers. And, in some ways, well, in a lot of ways, we became friends.”

They stayed in touch throughout the years and more recently, Firerose started sending him her music. He liked her sound and loved that she played every instrument in her songs. Them sharing music with each other led to their “New Day” duet, which then led to a deeper friendship, and now relationship.

See some of their sweet moments together in their new music video for the song “Time.”