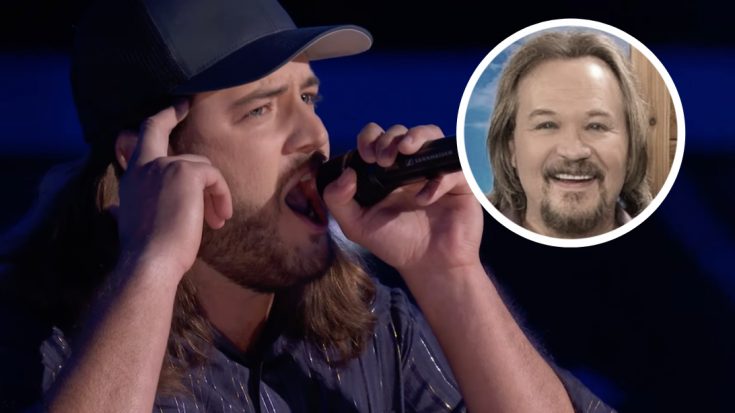 Travis Tritt is nothing less than a country music legend, so fans of the singer were thrilled to hear one of his biggest hits covered during Tuesday night’s episode of The Voice.

Travis Tritt emerged on the country music scene in 1989 with his debut single, “Country Club.” One year later Tritt earned his first No. 1 with “Help Me Hold On.” Those singles were just the beginning for the singer who went on to become one of the most successful artists in the genre with seven platinum certified albums, 40 songs on the Hot Country Songs chart, Grammy Awards and membership in the Grand Ole Opry.

In 1991, Travis released his sophomore album, It’s All About to Change. It would become his best selling album, earning triple-platinum status with sales of more than three million copies.

All four singles released from the project landed in the top five on the country music charts, including “Here’s a Quarter (Call Someone Who Cares)” and “The Whiskey Ain’t Workin'”, a duet with Marty Stuart. The album’s second single, “Anymore,” also became Tritt’s second No. 1 single.

Nashville-based country singer Tanner Fussell took the stage during Tuesday night’s The Voice Blind auditions to deliver a tribute to Tritt with a cover of “Anymore.”

Tanner Fussell earned a coveted spot on Team Blake after his soulful cover of the Travis Tritt hit. But, Blake teased the singer about losing his spot after finding out that he wasn’t sporting a mullet under his baseball cap.

Blake Shelton was the only coach to turn his chair after Fussell’s performance, but seemed happy when the singer appeared to be sported an impressive mullet. But, Fussell removed his hat to show that he had long hair “all the way around.”

“Aww…that’s not a mullet. I’m sad now. I thought you had…Turn my chair back around,” Blake joked.

Shelton went on to praise Fussell’s choice of song saying that Travis Tritt is one of his heroes.

“You got a little bit of Travis. You also have a rock edge,” Blake said of Tanner’s voice. “There’s no way I was gonna let you get out of here without getting a button push.”

Blake’s wife, Gwen Stefani, also complimented Fussell saying, “I super like you. You have the best coach you could ever wish for for country music.”

Hear Tanner Fussell’s Voice Blind audition in the video below.