Alice Cooper Once Pointed A Loaded Gun At Elvis Presley 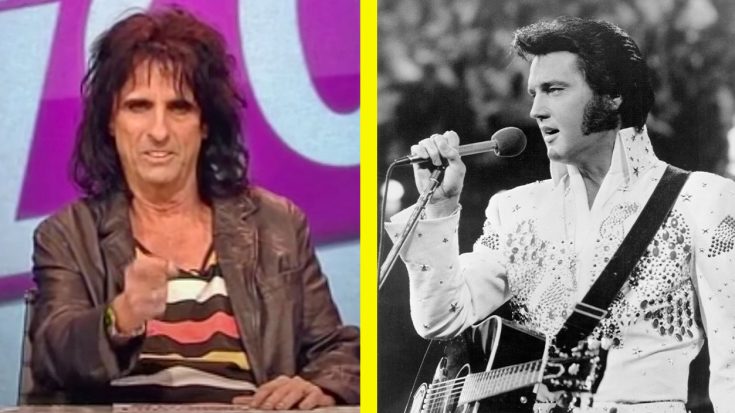 When it comes to stories about Elvis Presley, few can match the bizarre encounter that Alice Cooper had when he met The King for the first time.

The famous rocker was told by Presley himself to point a loaded gun at his head.

The incident took place in 1970 when Cooper received an invitation seemingly out of nowhere to meet Elvis at the Hilton hotel in Las Vegas. Cooper recalled events of that night decades later on the BBC TV series Never Mind the Buzzcocks.

Cooper was one of four people that Presley had invited to his hotel room that night. Along with Cooper, The King had invited Liza Minnelli, Chubby Checker, and Linda Lovelace.

He explained that upon their arrival, the group was immediately searched for guns which he later thought was ironic since there were guns everywhere once they were inside the room.

Once the two had officially met, Presley summoned Cooper into the kitchen where the strange occurrence took place.

“He opens the drawer, takes out a loaded .38, snub-nose .38, puts it in my hand and he says, ‘I’m gonna show you how to take this gun outta somebody’s hand,’” Cooper recalled. Then he jokingly added, “The little devil here on my shoulder says, ‘Shoot him! The little angel over here says, ‘Don’t kill him. Just wound him.’”

“Before I could decide what to do, I was on the floor. And he had his boot on my throat. And I’m going, ‘Argh! That’s good, Elvis.’”

Cooper finished the story by saying how much he enjoyed that night. “He was an amazing character. Very funny guy. But he was Elvis.”

Watch Cooper tell the full story in the video below.