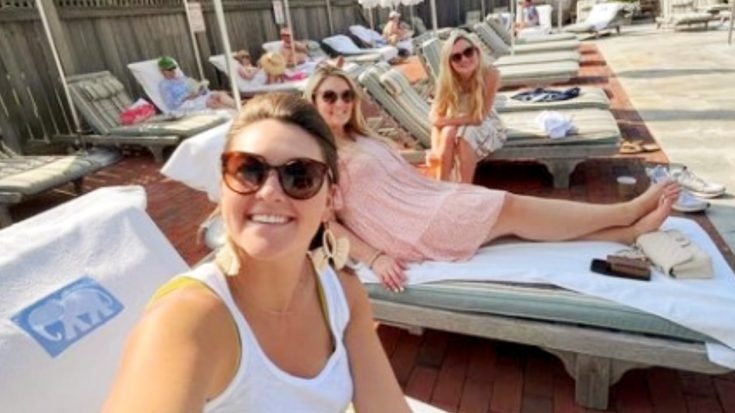 Alan Jackson and his wife, Denise, share three beautiful daughters: Mattie, Ali, and Dani. This year, the girls and their significant others went on a summer vacation to the island of Nantucket in Massachusetts.

Mattie, who is the eldest, shared some photos from their trip on social media. She thoroughly enjoyed her time on the island, saying it felt like her “home away from home.”

She detailed all of the activities she and her sisters enjoyed over the course of their vacation. They went on boat cruises, watched sunsets, had cocktails and lobster, and embarked on several “adventures.”

“10/10 recommend Nantucket for a special summer getaway!” she said. Look below to see the batch of photos Mattie shared from the trip.

Mattie was accompanied on the trip by her boyfriend, Connor. She introduced Connor to her followers in April, but they had been dating for six months at that point.

For those who don’t know Mattie’s story, she married Ben Selecman in 2017. Ben died following a tragic accident in September 2018, just one month shy of his and Mattie’s first wedding anniversary.

Mattie has been incredibly open about her heartbreak. She wrote a book called Lemons on Friday that details her journey with her grief and her faith.

When Mattie introduced Connor on social media, she said she always prayed God would give her the chance to find love again:

“I have believed, prayed, and claimed for 3 and a half years now that God would give me the chance to love someone with my whole heart again,” she said. “Other dear widow friends assured me that my heart could heal and expand to love two people equally, though differently. And I hoped so desperately that would really be true. This man is more of an answer to prayer (mine and countless others!) than I sometimes think he even realizes.”

You can meet Connor and learn more about him below.