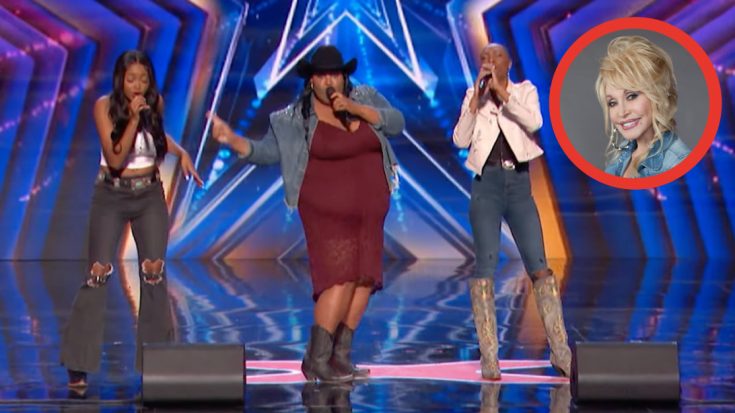 Just when we think we’ve seen it all on “America’s Got Talent,” the show goes and pulls out another surprise. During Tuesday night’s episode (July 19) of the talent competition, viewers saw the first-ever simultaneous Golden Buzzer play as all of the judges and the show’s host, Terry Crews, came together to awards a country trio the honor.

Mississippi trio Chapel Hart earned the coveted Golden Buzzer with their performance of an original song titled “You Can Have Him, Jolene,” a song written in response to Dolly Parton’s 1974 hit “Jolene.” Comprised of two sisters and their cousin, Chapel Hart won the crowd and the judges over with their energy and flawless vocals.

“Trust me. I needed you today,” Simon Cowell told the group after their performance. “That was fantastic. I love you. And I love the choreography going on around you. It was just brilliant.”

Cowell then asked if they had been trying to get a record deal or “big break.”

“We’ve been trying to break into Nashville for the last couple of years, but it’s been hard when country music doesn’t always look like us,” they replied.

“You guys look like you’ve been doing this for a long time, and I’m so proud of you guys,” Vergara added.

Simon Cowell and Heidi Klum both told the group that if they hadn’t pressed the Golden Buzzers for other acts already, Chapel Hart would have definitely earned it from them. But, in a tiny bending of the rules, the judges huddled with host Terry Crews joining them, to discuss the fate of the trio. They then turned to the buzzer and, on the count of five, simultaneously pressed the Golden Buzzer, sending Chapel Hart through to the live shows.

Since Chapel Hart’s audition, their video has garnered more than 10 million views on Facebook and nearly 2 million on YouTube. It’s no surprise that their performance caught the attention of Dolly Parton herself who took to Twitter to respond, saying, “What a fun new take on my song, @ChapelHartBand! Carl’s birthday is today so I think I’ll hang on to him, and I’m not notifying Jolene that today is his birthday.”

Watch Chapel Hart’s “America’s Got Talent” audition in the video below.