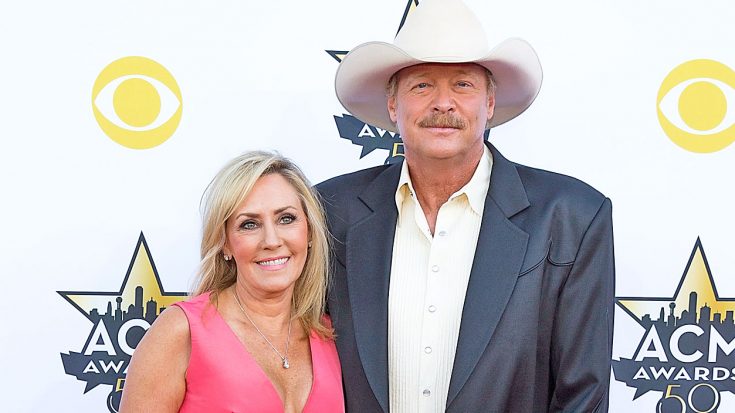 Sweethearts From A Young Age

In 1983, Alan Jackson started his career in country music, and eventually became one of the industry’s biggest stars. Since the start of his career, Jackson has had one special person by his side, his wife, Denise.

I love this picture of Alan Jackson and his wife Denise Jackson. They are a special couple in my heart. pic.twitter.com/LBAoub1Kn4

Long before Alan became the country star we know today, or before he even started his career at all, he caught the eye of Denise Jackson (yes, she had the same last name as him!). The two were high school sweethearts, and eventually married in 1979.

Denise is actually the one responsible for helping kickstart Alan’s career. While working as a flight attendant, Denise approached country singer Glen Campbell in an airport and told him about Alan’s dream. Denise managed to catch Glen’s attention, and he later stepped in to help Alan launch his career.

Starting A Family & A Legacy

As Jackson’s career started to gain traction, the couple welcomed their first daughter, Mattie, in 1990, followed by daughters Ali and Dani in 1993 and 1997.

In 2004, Denise made an appearance in Alan’s music video for his single, “Remember When.” During an instrumental break in the music, the couple slow danced and shared a kiss while images of them played over the screens in the background.

Alan wrote the song as a reflection on his life with Denise, describing how their love has grown over the years and how they will look back on their relationship someday and say, “remember when?”

Denise isn’t always able to join Alan while he is on tour, but she was able to attend one particular concert in 2007 in Atlanta, Georgia. As Alan introduced his band, he couldn’t help but acknowledge his beautiful wife, and invited her to join him on stage.

“I got another guest I want to introduce tonight, which I don’t get to do much,” he said, “my wife, Denise.”

When Denise walked out on stage Alan quickly wrapped his arm around her and smiled. It’s clear that after all these years, he’s still smitten with her. You can watch the adorable moment between the couple in the video below.

We wish Alan and Denise a happy anniversary, and here’s to many more!