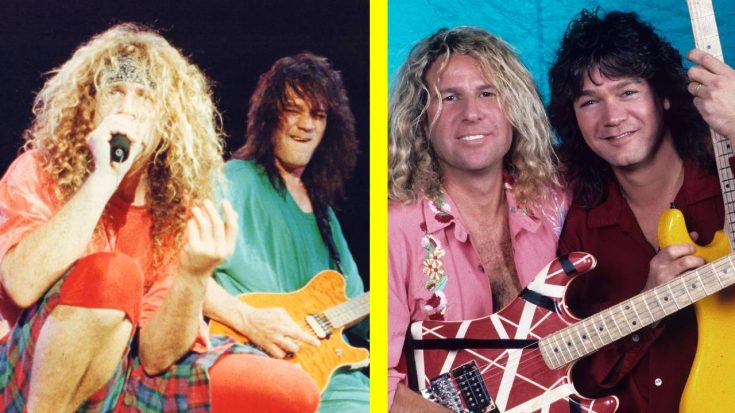 In 1985, Sammy Hagar joined the rock band Van Halen, replacing lead singer David Lee Roth after he left to embark on a solo career. He was a member of the band until 1996 and again from 2003-2005.

During his first stint as lead singer, Van Halen had four multi-platinum, number one albums: 5150, OU812, For Unlawful Carnal Knowledge, and Balance. During this time, fans often referred to the band as “Van Hagar.”

Several disputes among band members led to Sammy’s departure in 1996. Both he and Eddie Van Halen have done interviews about what happened and it’s all a he said/he said situation.

#Throwback to 1988. Eddie and I holding each other’s guitars. That was Frankenstein and he had my model he had made for me from Kramer. #MissYouBud #OU812 #Backstage

Despite their differences, Sammy returned for two years for a reunion tour, but went their separate ways once again. In recent years, Eddie was battling cancer and Sammy wanted to bury the hatchet. In a new interview with Variety, Sammy revealed that he was trying to get ahold of Eddie for a while.

Happy birthday Eddie Van Halen. I hope you’re healthy and happy. I love this picture of us rockin’ out.

Finally, a mutual friend – actor and comedian George Lopez – called Sammy up and told him just how bad Eddie’s cancer was.

Sammy told Variety, “George is a dear friend and he was Eddie’s friend and he said, ‘Sammy, Eddie’s in bad shape, he loves you brother, you need to reach out.’ I said, ‘Give me his fucking number and I’ll make sure I call him.‘”

So, George connected the two and it was perfect timing.

“Poor Eddie, broke my heart, but thank God we connected before [he died],” Sammy said. “I said, ‘Why don’t you respond? I’ve been reaching out,’ and Ed said, ‘Why didn’t you call me? Don’t fucking call my brother, fucking call me!’ And I said, ‘I love you man,’ and it was like, boom, we were good. It was a beautiful thing.”

Eddie passed away in October 2020 following a battle with cancer. His death was confirmed by his son, Woflgang.