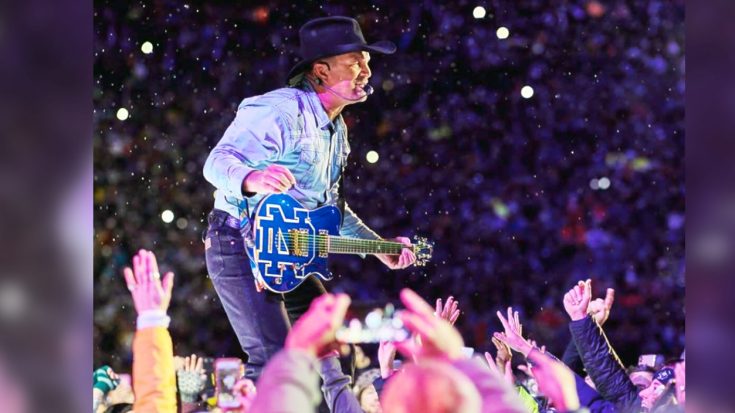 On October 20, over 80,000 people bundled up and braved the chilly fall weather to see Garth Brooks put on a once in a lifetime concert at Notre Dame Stadium.

Special thanks to all who made #GARTHatND history last weekend (we can't wait to do it again). pic.twitter.com/l9rXh9BGxB

The night was historic for many reasons. For starters, the show was completely sold out. All 84,000 available tickets were sold within three hours of being placed on sale.

Secondly, Brooks was the first-ever artist to play at the 88-year-old stadium. And finally, the event marked his first-ever stadium show.

This may be surprising to some, considering the fact that he has been one of the genre’s leading stars for years.

The First Of Many Stadiums

But there’s a valid reason why Brooks hadn’t performed in a stadium prior to Notre Dame. Stadium shows have become a more common part of country stars’ schedules within recent years, just as Brooks was coming out of retirement.

Wanting to test the waters to see if he still had ticket selling power, Brooks first embarked on a three-year World Tour.

After breaking ticket sales records at many of those venues, it became clear that he had the power to sell tickets to stadium shows. The Notre Dame concert will be just the first of many.

On October 17, Brooks announced his plans to embark on a three-year, 30-stop stadium tour. The tour will kick off in the spring of 2019.

If his Notre Dame show was any indication, these upcoming shows could be some of the biggest country concerts ever.

Announcing the Stadium Tour!!! Get ready for GAME DAY across North America!!! love, g For all details, go here: https://bit.ly/2NMRT6G

Following the success of Brooks’ Notre Dame concert, another country superstar is about to follow in his footsteps.

That star is none other than Tim McGraw. He’ll likely have plenty of new material to perform at the show, since he appears to have a new album in the pipeline.

Recently, McGraw released two new songs, including a single, “Neon Church.” Based on how well the song has done already, it will likely be a huge hit by the time he plays Notre Dame.

Although McGraw is following Brooks to Notre Dame, his show is not going to follow his format. His performance will differ in one big way. Or rather, a small way.

Tickets for the concert will range in price from $40-$125 and will be available for purchase on a later date.

As one of the most well-known entertainers in all of country music, the folks at Notre Dame are in for yet another great performance when McGraw comes to town.

Have you ever seen McGraw perform live before? If not, tune in to the video below to get an idea of what you’ll be in for if you want to see him sing at Notre Dame!