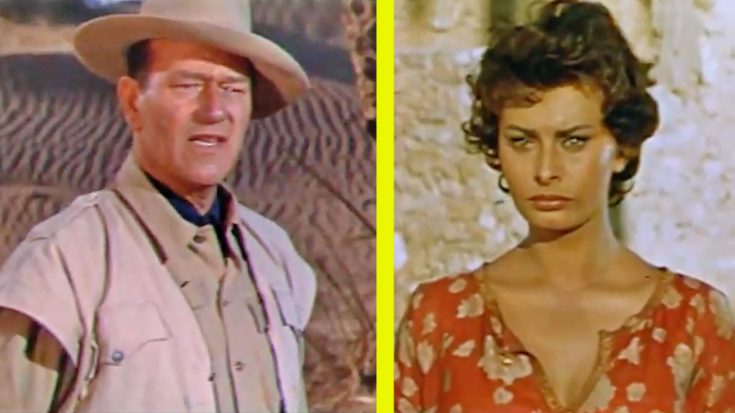 Sophia Loren is one actress who had the opportunity and pleasure of working with none other than John Wayne.

The 86-year-old actress has a glistening career that spans across decades and most recently appeared in the 2020 film, The Life Ahead.  Loren was born on September 20, 1934 in Rome, Italy, and was encouraged to pursue acting when she entered a beauty pageant at the age of 16.

One of her first English-speaking roles was that of Dita in 1957’s Legend of the Lost, which also starred John Wayne.

Loren appeared in the Actors/Directors/Screenwriters issue of TheWrap’s awards magazine where she recalled her experience working with Wayne.

“I was working with John Wayne on Legend of the Lost. One of my first English-speaking roles. My English was not great, the crew would sometimes make fun of me, but John Wayne always would stick up for me.”

In addition to working with John Wayne, Loren also talked about the privilege she had of appearing alongside Charlie Chaplin in his last film, The Countess From Hong Kong. Chaplin is regarded as one of the most important figures in the film industry so it’s understandable that Loren would’ve been intimidated working with such a renowned person.

“I was so nervous working with him, he’s such a master. But on the first day on the set I realized he was just as nervous. If you care and love something, you get nervous. I’m suspicious of people who don’t ever get nervous.”

Watch the trailer for The Countess From Hong Kong below.