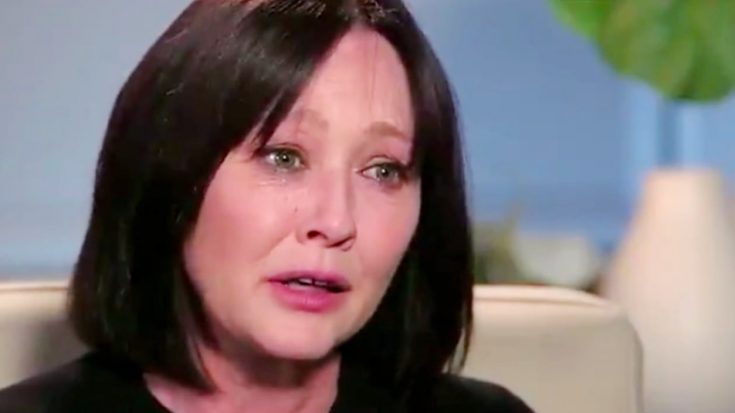 Three years after announcing she had gone into remission following a battle with breast cancer, Shannen Doherty learned some troublesome news. The actress spoke with ABC News to reveal her cancer “came back,” and it has been diagnosed as Stage 4.

“It’s going to come out in a matter of days or a week that I have stage 4,” she said. “So my cancer came back and that’s why I’m here.”

"I don't think I've processed it. It's a bitter pill to swallow in a lot of ways." https://t.co/NvMKIpSDmT

Doherty was first diagnosed with breast cancer in 2015. She then went into remission before learning about her Stage 4 diagnosis.

In her interview with ABC News, she said she kept the diagnosis private while she worked on filming the reboot of Beverly Hills, 90210:

“It’s a bitter pill to swallow in a lot of ways. I definitely have days where I say, ‘Why me?’ And then I go, ‘Well why not me? Who else? Who else beside me deserves this?’ None of us do,” she said.

She said it was especially hard for her to come to terms with the diagnosis following the unexpected death of her Beverly Hills, 90210 co-star, Luke Perry, in 2019.

Shannen Doherty says Luke Perry's passing prompted her to join #BH90210 reboot: "This was a great opportunity to honor him" https://t.co/5j6XuVOwTr pic.twitter.com/K4ccx29lDT

“It was so weird for me to be diagnosed and then somebody who was seemingly healthy to go first,” Doherty said. “It was really shocking and the least I could do to honor him was do that show. I still haven’t done enough in my opinion.”

While Doherty is perhaps most well-known for playing Brenda Walsh in Beverly Hills, 90210, she has appeared in many other notable shows and projects. One of her first roles was on the TV series Little House on the Prairie.

Doherty played Jenny Wilder, the niece to Laura Ingalls Wilder and her husband, Almanzo. She later reprised the role in three spinoff films, Little House: Look Back to Yesterday, Little House: The Last Farewell, and Little House: Bless All the Dear Children.

Through the years, Doherty also starred in Heathers, Charmed, and Girls Just Want to Have Fun. She is set to appear in three films that are either completed or in post-production.

Our thoughts and prayers go out to Doherty in the midst of her cancer battle. You can hear her share the news of her Stage 4 diagnosis by tuning in to the video below.