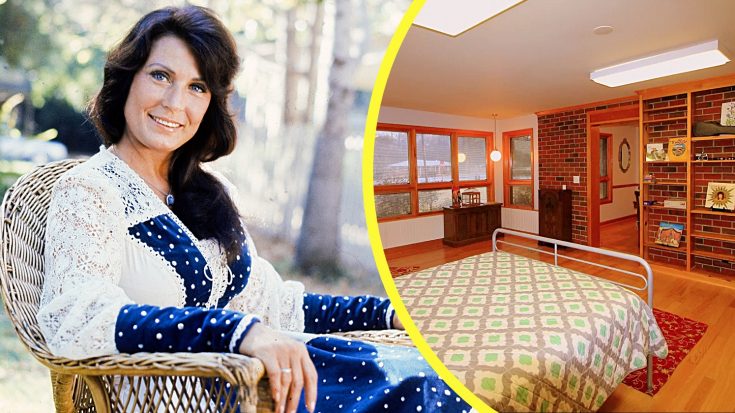 Listed at a jaw-dropping low price that’s just a drop in the bucket compared to the list price of many of today’s celebrity homes – and it holds a huge amount of country music history behind its walls.

The three-bedroom, two-bathroom ranch home boasts 1,800+ square feet and looks straight out of the 60s – which is exactly when Loretta Lynn and her family lived there!

Built in 1955, the house received some upgrades in the early 1980s when the den, laundry, pantry, and additional bathroom were added. The home still has the original wood flooring, panel doors, pinewood cabinets, a vintage wall mural, and other unique features.

Loretta Lynn first moved into this Madison, Tennessee home in 1961 and was assisted by the Wilburn Brothers and her new record label: Decca Records. It was just a year prior that the Wilburn Brothers helped her to get signed to the label. She had also just been named Billboard magazine’s No. 4 “Most Promising Country Female Artist.”

At this point in her life, she was getting ready for the next big chapter and this was a great first step. According to a post about the house and listing by agent Jason Galaz fo Exit Realty Elite, they had a big housewarming party with their Opry friends to signify this great moment in her life.

“It is said they hosted a house warming party and got their Opry friends to chip in to donate household items and appliances. Patsy Cline ordered curtains and ordered furniture to be made. Loretta and her husband, a mechanic had sold everything to get to Nashville from Washington state.

Her career started to pick up steam in 1962. Loretta was able to earn enough from a Mid-West tour with the Wilburn Brothers to afford a new Oldsmobile. The Lynn’s live here until the spring of 1963, when they purchased a 1910-era farmhouse on Willis Branch Road in nearby Goodlettsville.”

Listed at just $349,000 this famous piece of Nashville and country music history could be yours! Check out the full listing here – and take a peek at some of the photos below!