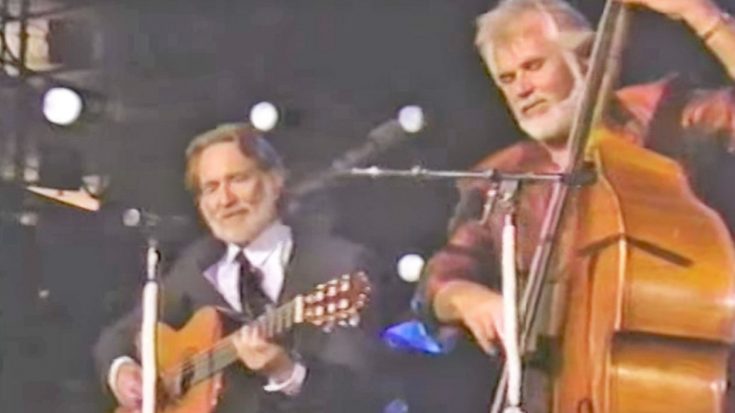 It doesn’t get more country than this! Willie Nelson and Kenny Rogers teamed up for a once-in-a-lifetime performance of Nelson’s “Blue Skies” and it was absolutely breathtaking.

“Blue Skies” was originally composed by Irving Berlin in 1926, taken on by Nelson over five decades later in 1978. The song was a massive success on an international scale, charting in Australia, Canada, New Zealand, as well as topping Billboard‘s Hot Country Songs.

The country legends got together for part of an NBC special and Rogers couldn’t hold back his excitement for the duet. He told Nelson admiringly, “One of my favorite albums that you ever recorded, and obviously one of theirs as well, is the Stardust album. You did a song called ‘Blue Skies’ which happens to be one of my favorite songs.”

While Nelson showed off his phenomenal guitar playing skills he sang, “Blue skies smiling at me/ Nothing but blue skies/ Do I see bluebirds singing together,” and Rogers added in depth with his upright bass. “Singing a song/ Nothing but bluebirds all day long.”

You can tell from the crowd’s hoots and hollers that there was a truly special kind of energy in the place that night. Even more, their performance went on to win a Primetime Emmy for “Outstanding Sound Mixing in a Variety or Music Series.”

And the boys weren’t the only legends in the house that night. Later on, during the television special, they teamed up with Dolly Parton for a rare performance of “Something Inside So Strong.”

Still, fans couldn’t stop talking about how well Rogers was able to accompany Nelson on his famous track. You can watch the duet below and let us know what you think in the comments!