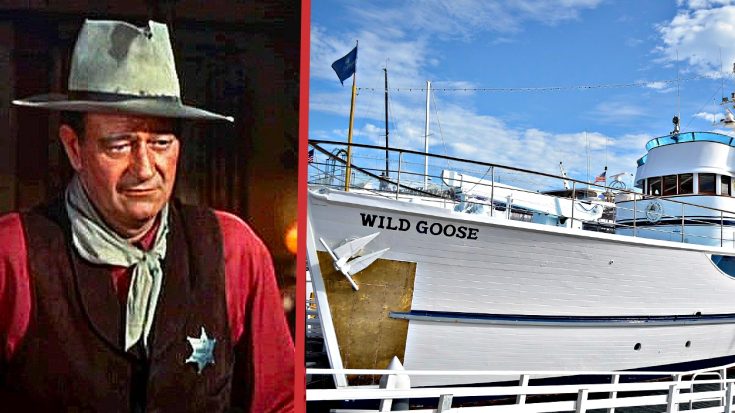 For the last 17 years of his life John Wayne enjoyed a good deal of that time with his friends and family aboard his custom yacht, Wild Goose.

The ship itself was a 136-ft. US Navy Minesweeper that the Duke purchased for $110,000 in 1962 and converted into a three-decker floating luxury.

The ship has extravagant wood detailing, murals, and the bridge table where Wayne would spend all day playing games near the end of his life.

Shortly after he took possession of the ship, the $3 million renovation began. Five staterooms were added, interior bulkheads were removed to give the yacht a more spacious feel, and overheads were raised to accommodate Wayne’s height. A wood-burning fireplace, poker table, and built-in wet bar were added to the saloon which seats up to 127 people.

Even with these lavish upgrades, Wayne was intent on maintaining the boat’s naval heritage and left many of her original military elements intact, like the old-fashioned swivel wall fans, the bell, and the brass wheel in the wheelhouse.

The yacht is now owned by Hornblower Cruises located in Newport Beach, California. The company puts on different events and cruises in which fans of The Duke can actually step foot on his beloved yacht.

Wayne’s last trip aboard Wild Goose was on Easter weekend 1979. Before his passing the Hollywood legend used his yacht to entertain people like Richard Nixon and Ronald Reagan. It was also in several films, including “Skidoo” and “The President’s Analyst.”

Get a full video tour of Wild Goose below.