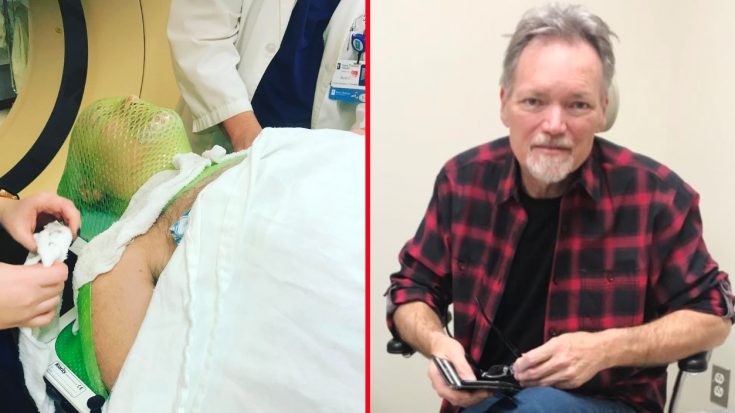 Just after the new year, beloved 90s country singer John Berry revealed in a video posted to his official Facebook page that he had recently been diagnosed with cancer. You may know Berry because of his hit songs “Your Love Amazes Me,” “What’s In It For Me,” “You and Only You,” and “I Think About It All The Time,” just to name a few.

In the video, Berry describes that he and his wife Robin, who had just wrapped up their 22nd year of their annual Christmas tour, started the year “with a little hiccup.”

He revealed to his fans that in November when the tour kicked off, he had a “catch” in his throat, which felt much like a peanut skin was stuck. Throughout the tour, it never went away.

He went to the doctor and received a couple rounds of steroidal treatments, but it didn’t improve the “catch.” Robin says although he was uncomfortable, it didn’t affect his singing. When the tour wrapped up, they saw an ear, nose, and throat specialist.

The specialist found two tumors on Berry’s tonsils, and after sending them for a biopsy, they learned the tumors were cancerous.

Although a cancer diagnosis is usually incredibly scary, Robin said, “You don’t see fear on these faces,” explaining that they have a great treatment plan and their complete faith in God.

In the video, Berry revealed that the type of cancer he has is one of the most treatable types, with a very high cure rate. Although they are maintaining a positive outlook, they asked that we all keep them in our thoughts and prayers.

Now – three months after Berry revealed his prognosis, the singer sat down with PopCulture.com to give fans an update on his health since completing his cancer treatments.

In a Facebook post on March 28, Berry announced it was his very last chemo treatment and had 8 radiation treatments left.

“Today is my last day of chemo treatments,” he said. “I can’t believe it’s the last day. It seems like just yesterday we were getting started, and I was looking at the calendar, going ‘Seven weeks.’ And all of a sudden, here we are at the end of it. The side effects have been minimal. I’ve had moments here and there where it’s been difficult, but boy has my God carried me through some days that I could not have walked through.”

John BerryAn Unexpected Story 4 Last day of chemo!! Feels really good to have that behind me. 8 more radiation…

On April 9th, he completed his final radiation treatment, and posted the moment he walked out of it – ringing a bell in celebration.

“Completed 35 treatments! I cannot believe I made it! Thank you! What a great day,” he said in the video.

In the interview, the “Your Love Amazes Me” singer told PopCulture.com that he is doing very well.

“I’m better than I thought I would be,” Berry told the website. “I’m recovering nicely from this cancer. The treatment was worse than the cancer.”

He also said that he has to go back to the doctor for regular check-ups.

“I’ll go back for periodic check-ups and have a pet scan done again,” Berry said. “That pet scan shows if any cancer has shown up. What they’re looking for is that two-year mark that says there’s no cancer. That’s kind of when they can say, ‘Have a good life.'”

Now that cancer is seemingly in his rearview mirror, Berry is excited to get back to work. He will soon serve as the opening act on Clint Black and Trace Adkins’ co-headlining Hits, Hats, History Tour.
But before that, he is the guest of honor at a tribute concert titled We All Come Together, which will take place Tuesday evening (April 23). Adkins, Vince Gill, Travis Tritt, the Oak Ridge Boys, and a few others are performing at the sold-out event that will help raise money for Berry and his family.
We are so happy to hear the positive update on Berry’s cancer! We will continue to keep him in our prayers.
Share on Facebook Share on Facebook Next