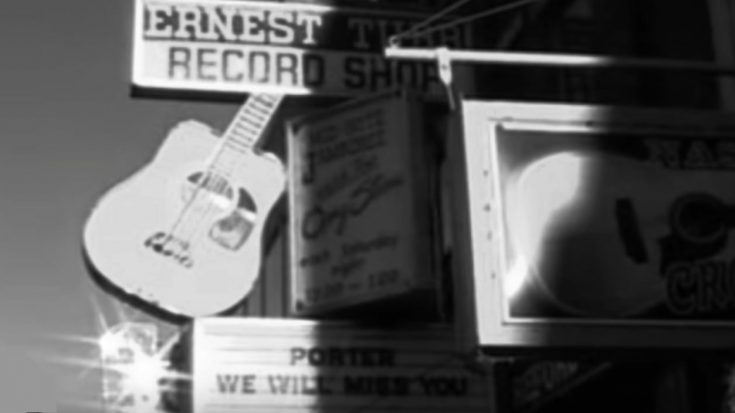 Ernest’s Old Shop Has An Even Older History

If you want to take a step back into country music’s past, there’s a building on Broadway in Nashville that you may want to visit. This building is home to Ernest Tubb‘s old record shop, which now houses a wealth of country music history and memorabilia.

It is also rumored to house a few supernatural guests.

Although Tubb founded his record shop in the building in the 1940s, its history dates back much further than that. It was actually built over 90 years before Tubb opened his shop there.

Originally, the building served as the home to William Stockell’s ornamental plaster business. Stockell’s plaster was used to decorate the Tennessee State Capitol building as well as the now-iconic Belmont Mansion in Nashville.

But the building’s purpose soon changed following the outbreak of the Civil War in 1861. Just nine years after it was built, the building once used as a home for ornamental plaster had been transformed into a Confederate hospital.

It Wasn’t The Best Hospital Around

Due to the building’s small size, it was only able to hold a limited number of beds. On top of that, the doctors and nurses were not prepared to treat the number of wounded soldiers who were brought into the hospital following the Battle of Nashville.

As a result, many of the soldiers passed away. Their bodies were moved to the basement, which became a makeshift morgue while the hospital was in operation.

After the Civil War ended, the building’s purpose changed yet again, and again, and again. Many businesses occupied the space over the decades that followed, including Toledo Scales.

The space was finally transformed into Tubb’s shop in the 1940s, and has carried his name ever since. And according to past employees and customers, it also carries the spirits of its former occupants.

According to Scary Nashville, there have been many record shop employees and customers who claim to have been “pushed or touched from behind” while in the store. Some employees also report hearing random footsteps in the building and have experienced problems with electronics.

Radio station 99.5 WKDQ out of Evansville, Indiana, notes that the shop is rumored to house a haunted CD player that starts playing a certain artist’s music whenever his or her name comes up. And blogger Eileen Sisk wrote that she was “groped” while visiting the record shop in 2010, but there was no one to be seen.

Sisk recalled the moment, writing, “Then Larry [the clerk behind the counter] told me that another woman who had been in the shop recently also had felt someone grab her butt cheek. ‘Well, you know this place is haunted,’ he said.“

Sisk said that the man behind the counter at the shop “went on to say there have been many strange happenings in the store” through the years.

So who, or what, is supposedly haunting Tubb’s record shop? According to locals, it is believed that the shop is haunted by the spirits of the Civil War soldiers who died there years ago.

The shop is so well-known as a haunted spot that people actually take “ghost tours” to it in the hopes they’ll have an encounter with the famed Civl War-era ghosts. If you’re into things like that as well, maybe you’ll also want to embark on a ghost tour there.

But from the sounds of it, you may be able to experience something supernatural just on an everyday visit to the shop. Now that’s spooky!