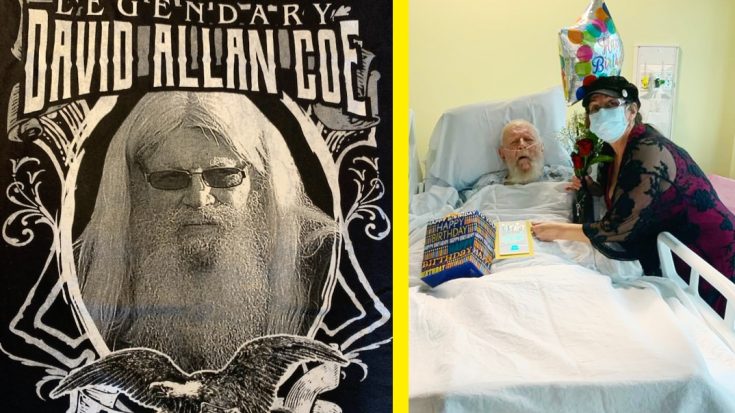 Just slightly more than a month ago, legendary outlaw singer David Allan Coe had begun to wind down some performances due to the rising waves of COVID-19 and the threat it could pose to himself, his family, and his crew.

Shortly after, David Allan Coe was hospitalized in Florida from the serious effects of the virus on his body. 81 years old at the time, he was in the high-risk category for serious illness and hospitalization from COVID-19.

On September 1st, 2021, his wife Kimberly took to social media to provide an update on his health battle, saying: “David is still in the hospital and is in stable condition while continuing to be treated for COVID-19. His oxygen levels are improving along with this hemodynamics, and he is continuously being monitored by hospital staff.”

Just a few short days later, David Allan Coe turned 82 while still hospitalized from the virus. Kimberly took several photos and brought him some nice things to help lift his spirits while he worked toward recovery.

On his birthday, September 7th, she shared that he was actively recovering from the virus and that his vitals were improving – and extended her deepest gratitude to those medical workers who helped him get to this point.

Finally, it has been reported that David Allan Coe is discharged from the hospital and is continuing his recovery at home surrounded by his loved ones. Saving Country Music reports that he is still on oxygen treatment, but is working toward being able to perform again – hopefully in the near future!