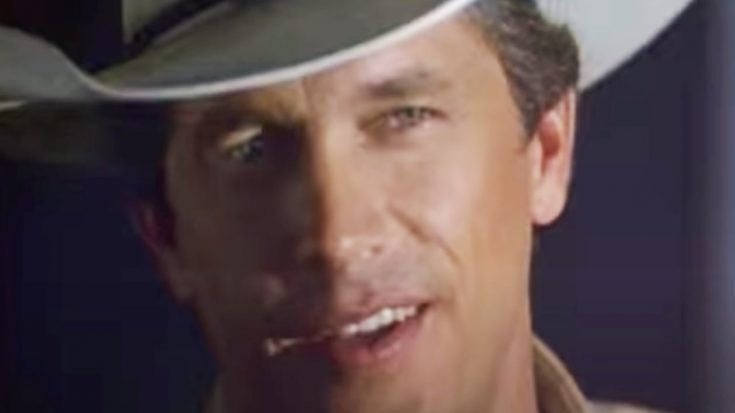 George Strait is a country singer first and foremost, but in 1992 he surprised us all when he strapped on his acting boots. Strait made his acting debut in a dramatic musical Western that still has country fans buzzing.

Called Pure Country, the film follows Strait’s character, Wyatt “Dusty” Chandler, who is a country singer that has grown frustrated with his over-the-top stage shows. Deciding to take a break from the business, Chandler changes his appearance and stays at a ranch in his hometown, where he ends up falling in love with the ranch owner’s granddaughter.

When Chandler finds out his manager has been putting someone else on stage to impersonate him, he returns to singing. He demands to be able to do the shows his way, and that’s when we get the famous scene of Strait singing his iconic song, “I Cross My Heart.”

We’re sure you’ve seen Pure Country a thousand times before, but there’s much about the film that you probably don’t know. Don’t worry, we’re prepared to fill you in!

1. The Film Was A Box Office Flop

Country fans may find this hard to believe, but Pure Country was considered by many to be a box office bomb. Appreciation for the film has seemed to increase with the passage of time, and it has a 6.9 star rating on the popular movie website, IMDb.

Despite the initial lack of interest in the film, the soundtrack was a soaring success. In fact, it’s Strait’s best-selling album to date, and has sold over six million copies.

2. Strait’s Son Makes An Appearance In The Film

Strait’s son, George “Bubba” Strait Jr. had his own role in Pure Country, though you never see him on screen. He was just a child at the time, but he played an important part in the opening of the film.

Remember the little boy in the opening song of the movie? Well that’s actually Bubba’s voice that you hear!

Today, the title Pure Country is deeply ingrained in our minds. But if Strait had his way, the title of the movie would have been completely different.

Strait was bound and determined to get the studio to change the film’s name, because he felt it wasn’t all about “country” themes. But the studio didn’t budge, and the name stayed the same.

You could say that “The King of Rock and Roll” had a role in helping “The King of Country” make his acting debut. Elvis‘ manager, “Colonel” Tom Parker saw Strait perform in Vegas every year and decided to go backstage and tell him to pursue an acting career.

Strait didn’t listen to Parker at first, but after Parker got a friend of his to convince Strait of his acting potential, he caved. Parker’s friend then called Pure Country‘s writer, and Strait had a role.

5. Strait Did His Own Roping Stunts

Oftentimes actors have stunt doubles who perform dangerous or complicated stunts for them. But that wasn’t the case for Strait in Pure Country, although the crew members wanted him to use a stunt double instead.

The crew didn’t want Strait to do his own stunts during the roping scene in the movie, but he was able to make his case. You see, Strait is actually a team roper in real life, and he even hosts a team roping event. Needless to say, he did just fine!

6. “The King Of Broken Hearts” Was A Tribute To A Country Legend

“The King of Broken Hearts” is one of the most recognizable songs from the film, but did you have any idea it wasn’t intended for it?

Turns out that “The King of Broken Hearts” was originally written as a tribute to the one and only George Jones. However, the director liked the song so much that he decided to put it in Pure Country, and the rest is history!

7. There’s A Reason Why Strait Doesn’t Kiss His Love Interest At The End

After watching Pure Country again and again, you’ve likely noticed that Strait doesn’t kiss his love interest at the end of the movie. He wraps her up in a hug instead, which left some audience members puzzled.

But there’s an important reason why Strait didn’t kiss his co-star. You see, Strait has been happily married to his high school sweetheart, Norma, since 1971. Because of his devotion to Norma, Strait refused to kiss his co-star in the film. So that’s the reason why you only see them share a simple embrace!

18 years after Pure Country was released, a sequel made its way out into the world. Called Pure Country 2: The Gift, the film is completely unrelated to the original movie.

Country artist Katrina Elam starred in the lead role of the film, while Strait made an appearance as himself. The movie didn’t do as well as its predecessor, but it’s hard to beat something as good as the first Pure Country! After all, it was when we were first introduced to “I Cross My Heart.”

Which one of these facts surprised you the most?