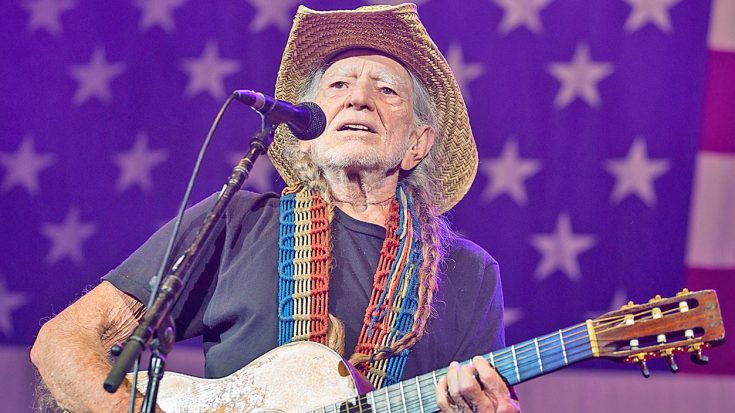 Willie Nelson recorded his first record in 1956, and although it did not succeed, he continued to work as a radio announcer and sang in clubs.

He got his big break in 1960 and the rest is history. He now has a legendary career and is one of the last living legends in country music. He’s acted in over 30 projects, recorded over 70 studio albums, ten live albums, 37 compilations and over 25 collaborations, and helped the Outlaw Country movement.

Along with being a legendary musician, he is a badass person, so we compiled a list of 8 times he proved he was a complete and total badass

1. He Proved He Could Still Beat Us All Up At 81 Years Old

More evidence of dad being a badass at 81 #willienelson #merrychristmas

Posted by Lukas Nelson & Promise Of The Real on Wednesday, December 24, 2014

Seven years time ago, Willie’s son, Lukas, shared a video of his 81-year-old father punching a speed bag and being the badass he is.

Most people don’t know this, but Nelson is a Tae Kwon Doe enthusiast. The day before his 81st birthday, he was awarded with his 5th degree black belt. Nelson has been studying martial arts for most of his life and trains in his tour bus!

2. He and Merle Haggard Recorded The Hag’s Last Album

In 2016, the world lost a legend when Merle Haggard passed away, and Nelson lost his “brother.” Luckily, the two were able to make more memories together while they recorded their duet album, and Haggard’s last.

Watch a behind the scenes video of the 18 months it took to create this musical masterpiece.

3. He Wrote A Patsy Cline Classic

Before Willie made it big as a singer, he was a pretty accomplished songwriter. Not many people know this, but Nelson actually wrote Patsy Cline’s classic hit “Crazy,” which climbed the charts all the way to number two in 1962.

Nelson originally wrote the song for Billy Walker, but turned it down because he thought it was a “girl’s song.”  The song’s success helped launch Nelson’s career as a performer as well as a songwriter.

4. He Was The First Country Artist To Win A Gershwin Award

On October 21, 2015, Nelson announced via Twitter that he was the most recent recipient of the Library Of Congress Gershwin Prize For Most Popular Song.

According to the Library of Congress website, The Gershwin Prize is awarded each year in order to celebrate “the work of an artist whose career reflects lifetime achievement in promoting song as a vehicle of musical expression and cultural understanding.”

Past recipients have been Paul McCartney, Billy Joel, and Stevie Wonder. His family was with him when he received the award and they were beaming with pride!

The award inspired Nelson to record an entire album of Gershwin songs, and it’s absolute beautiful. Take a look at one of the songs off the album, “Summertime,” above.

5. He Smoked Pot On The Roof Of The White House

Nelson has been a marijuana-enthusiast for a very long time. He is a co-chair on the National Organization for the Reform of Marijuana Laws advisory board, which fights for legalization of weed.

In an interview with CNN in 2012, a reporter asked him if it was true that “he rolled a joint on the roof of the White House under President Carter”, who held office from 1977-1981.

“No, I rolled it before I got up there,” he said without skipping a beat. Hilarious!

Watch the full interview in the video above.

6. He Smoked Pot At The White House…AGAIN!

The legalization of marijuana in Washington D.C. called for a celebration.

By chance, Nelson was performing at the White House the day it was legalized and was able to share his joy with the President of the United States.

In an interview with The Washington Post, Nelson talks about his conversation with President Obama that day.

“I asked President Obama, ‘Did you hear they legalized pot here today?’ and he said, ‘Yeah, I heard about that.’ And I laughed. And he said, ‘Well, you know, I’m from Hawaii.’ So we had a big laugh about it.”

When asked if he ‘lit one up’ at the White House, his response was, “No. Well, I did, but not with him.” He’s fearless!!

According to Farm Aid’s website, Nelson, along with John Mellencamp and Neil Young, organized a “groundbreaking concert” in 1985 to help raise awareness and raise money for America’s family farmers.

Family farmers were in need of assistance and Nelson, Mellencamp and Young decided to plan a concert for America. The show was put together in six weeks and was held on September 22, 1985 in Champaign, Illinois before a crowd of 80,000 people. It raised over $9 million for America’s family farmers. Performers included Bob Dylan, Billy Joel, B.B. King, Loretta Lynn, Roy Orbison, Tom Petty and many more.

They have been helping family farmer’s for the last 30+ years. Watch Nelson perform at the very first Farm Aid above.

In 1973, Nelson and Waylon Jennings decided to take creative control over their music, which they felt had been hindered by record labels and executives.

They shed the “Nashville sound” they had been playing, grew beards and long hair and replaced their rhinestone-studded suits with leather jackets and were referred to as “outlaws”.

Their new style of music was then called Outlaw Country, which Nelson and Jennings kicked off with their duet album, Wanted! The Outlaws. The new genre and album were so popular that the album became the first country music album to go platinum.

It reached number one on the charts released two singles, each reaching the number one and number two spots on the country charts.

Johnny Cash, Merle Haggard, Kris Kristofferson and Hank Williams, Jr. are the most notable Outlaw Country singers. How many singers can say they helped create a genre of music?!

Which fact about Willie makes him the most badass?