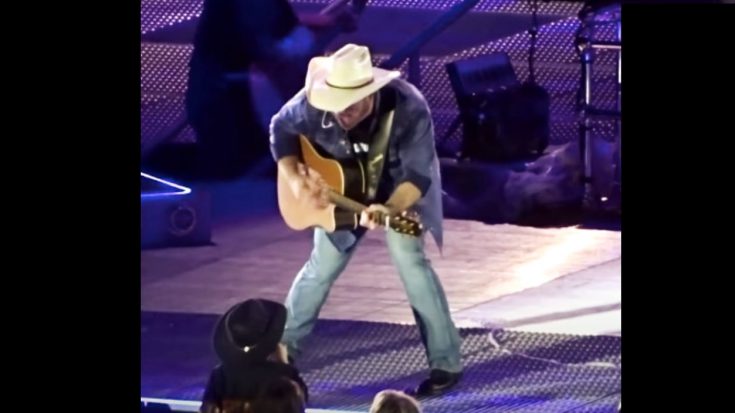 Garth Brooks is known for taking song requests during his concerts. During his recent show at Nashville’s Nissan Stadium, Garth took a pretty big request from a little fan.

During the requests portion of his show, Garth noticed a boy near the front of the stage who was holding up a sign. The sign said that it was the young fella’s first concert ever!

Garth learned the boys’ name was Charles, and he was seven years old. He shook Charles’ hand and autographed his sign. Then, he learned Charles wanted to hear Garth sing his Top 10 hit, “Standing Outside the Fire.”

Since the song was released many years before Charles was born, Garth teased him, wondering if it was actually his parents who wanted to hear the song. But when Garth asked if Charles knew the words, he said he did. The boy had even been practicing the lyrics in the leadup to the concert.

So Garth got Charles a microphone!

Charles sang a duet with Garth, and held his own. Garth and the audience were impressed to hear just how well Charles knew the song.

Another attendee happened to capture Charles and Garth’s duet on camera. You can watch that video below.

This was one memorable moment that Charles and his parents are sure to treasure forever!

"Can you sing, by any chance?" Garth asked.
Once Garth determined that Charles knew the words to the song and had actually been practicing it all week, he gave the boy a hot mic and let him sing along with the entire song from the audience.
And Charles did. pic.twitter.com/UtPXKHI9T1