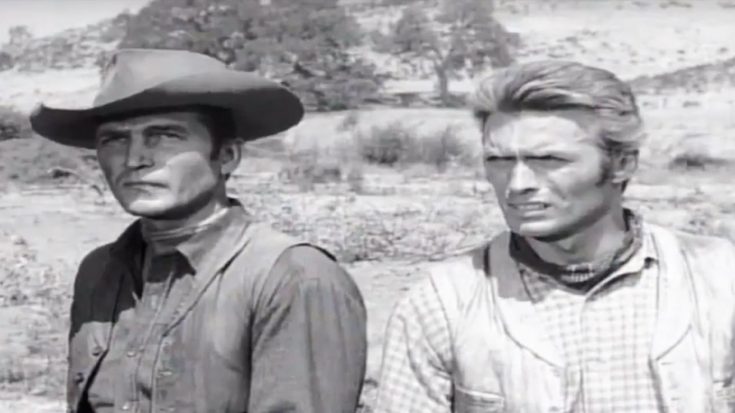 Rawhide is one of the most widely recognized westerns ever to have been created. Even to this day, reruns of the show air from time to time and resurrect this beloved classic. Aside from it being one of the most popular westerns ever produced, there’s plenty of fun facts about the show that many folks might not be aware of. Below is a list of interesting facts worth highlighting.

1. It Started Out With A Different Name.

Originally the show was to be titled Cattle Drive but the show’s writer, Charles Warren made the decision to change it to Rawhide.

2. It Was The Fifth Longest Running Western.

Rawhide aired for an impressive 217 episodes over the course of eight seasons — from 1959 to 1965. It is beaten in this category only by Gunsmoke, which ran for 20 years; Bonanza, which ran for 14 years; and The Virginian and Wagon Train, both of which ran for nine years.

"Whatever success I've had is due to a lot of instinct and a little luck."

Portrait of Clint Eastwood on the set of Rawhide, 1959-1965. pic.twitter.com/FMqpOEfQIC

Fans with a keen eye will notice that Eastwood wore his same Rowdy Yates boots in his Oscar-winning 1992 masterpiece Unforgiven.

4. Eastwood Learned A Unique Directing Skill On The Series.

One signature of that style is that he doesn’t yell “Action!” on movie sets — it’s a habit he apparently learned from his time on Rawhide.

Tom Hanks, who starred in Eastwood’s Sully, explained why on the The Graham Norton Show,

“He treats his actors like horses because when he did the ’60s series Rawhide, the director would shout ‘Action!’ and all the horses bolted. So when he’s in charge, he says in a really quiet, soft voice, ‘All right, go ahead,’ and instead of shouting ‘Cut!’ he says, ‘That’s enough of that.’ It’s intimidating as hell!”

Eric Fleming who played Gil Favor, left the series in 1965 and began to venture into movie roles. He appeared in the Doris Day comedy, The Glass Bottom Boat, and then began work on location in Peru for the adventure High Jungle. When filming a scene on the Huallaga River, Fleming’s canoe overturned and the actor perished in the rapids.

Remembering #EricFleming (RIP), most famous for his role as Gil Favor in the CBS western series #Rawhide, alongside Clint Eastwood, btd 1925. pic.twitter.com/PSFKVzXj9w

6. Clint Eastwood Secretly Had A Child With One Of The Stuntwomen.

Eastwood and stuntwoman Roxanne Tunis had a child together. The secret was kept pretty well under wraps and at the time of the birth in 1964, Eastwood was already married to his first spouse, Maggie Johnson.

7. Several Actors Appeared On The Show Before They Made It Big.

Watch the opening and closing credits, including the famous theme song, below!