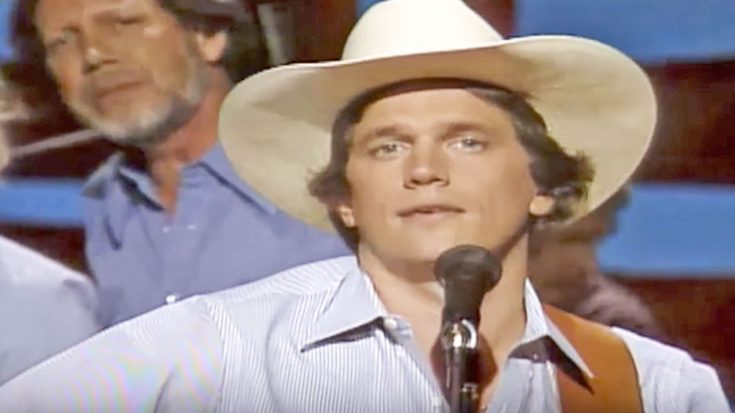 He’s not only the King of Country, but one of the biggest cowboy heartthrobs to ever grace the genre. Singing one of his earliest hits, 31-year-old George Strait will leave you blushing in one of his most flirty performances to date.

Performing the song during an appearance on hit country-themed variety series Hee Haw, the country singer left fans weak in the knees with an alluring delivery of his hit, “Amarillo by Morning.” Throughout his flirty performance, Strait often flashed his signature smile at the camera while masterfully singing his hit country song.

Since breaking out onto the country music scene in the early ’80s, Strait has accumulated 60 number one hits, shattering the record previously held by Conway Twitty. The King of Country has been widely credited for bringing the genre back to its roots which were beginning to sway more in the pop direction prior to his arrival on the music scene.

#Conway #Twitty
I Miss You! pic.twitter.com/IjnPCLVYi0

“Amarillo by Morning” was originally written and released by Terry Stafford in 1973, taken on by Strait almost one decade later. The King of Country took the song to the top of the charts, hitting No.4 on US Hot Country Songs following its 1882 release.

You can watch his performance of “Amarillo by Morning” below.