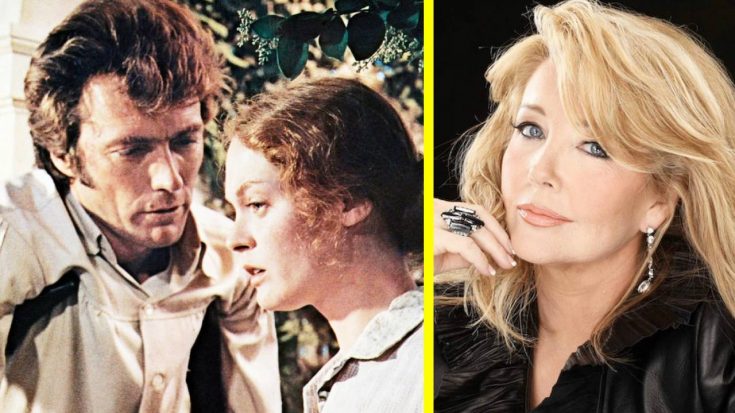 In a new book, a co-star of two of those films opened up about her time spent with the legendary actor – and time she stabbed him! Melody Thomas Scott, who was just Melody Thomas when she first started out – burst on the acting scene when she was just four years old and she wrote all about her six-decade career in a new book titled Always Young and Restless: My Life On and Off America’s #1 Daytime Drama.

She is likely best known for her role as Nikki Newman on CBS’s The Young and the Restless, which she has played since 1979, but she had a promising film career even before that. She has worked with Alfred Hitchcock in Marnie in 1964, was the last actress to share the screen with John Wayne in 1976’s The Shootist (even beating out Goldie Hawn for the role), co-starred with Kirk Douglas in 1975’s Posse and shared the screen with Clint Eastwood in The Beguiled and Dirty Harry.

Melody can be seen in the clip from The Beguiled below around the :56 mark.

In the book, Melody writes about how she became known as “the girl who stabbed Clint Eastwood with a needle.”

Clint’s character in the Southern gothic eventually dies and the female characters sew his body into a burial shroud. Melody, who played the character Abigail, was equipped with a “long, extremely thick, authentic Civil War sewing needle” to film the scene.

She was positioned near his feet and, for some reason, felt the urge to stick it in the actor’s foot. She did and he screamed and jumped out of the hole he was laying in. Melody, just 15 at the time, didn’t fess up and everyone – including Clint – thought he was bitten by an insect.

“I cannot explain what went through my mind, but I couldn’t resist it,” she said of sticking the actor with the needle. “He certainly didn’t deserve it because he was so sweet to us kids. Every morning, he’d come out of his [trailer] and give us all a kiss on the cheek. I mean: Clint Eastwood… Oh my god. We just adored him. I sat there for a few minutes thinking: Oh, no, I can’t do that. I can’t do that. I can’t do that. Oh, yes, I can! And I did it.”

Luckily, Clint was okay after the shock of the needle stabbing him in the foot, which is probably why Melody kept this secret to herself for over 30 years. She finally fessed up and apologized to Clint in 2004 at the Publicists Awards, where the actor/director was receiving an award. Melody was there as a presenter and took her time on stage to right a wrong she had done so many years prior.

“He just gave me that kind of wry look — that Eastwood look — like you never know exactly what he’s thinking,” she says. “He never really said in words, ‘You’re forgiven.’ But at least I got that off my chest and he — and most of Hollywood — knew I did that.”

Melody’s book is now available to purchase after starting to write it many, many years ago.

Check out the trailer for The Beguiled below.