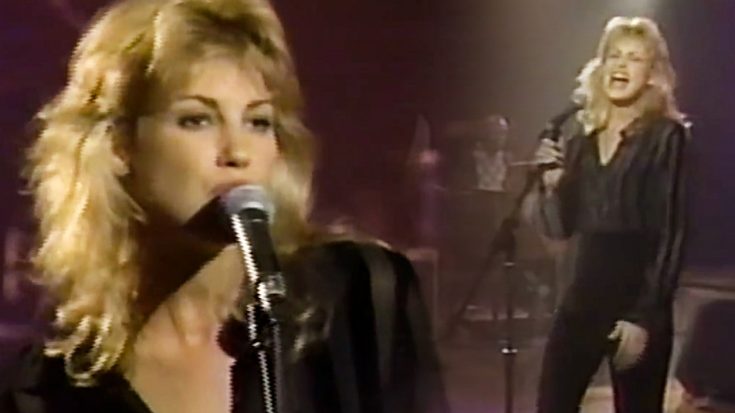 With billowing feathered locks of luscious blonde hair and a black-pinstriped sheer blouse featuring a plunging neckline, this rising country superstar truly was a vision – and a remarkable vocalist!

Taking the stage for a tribute to The King, Elvis Presley, this fresh-faced Faith Hill was taking the world by storm and jumped at the opportunity to sing one of her favorite performer’s classics.

Just a year after she broke out into the country music scene with her first major chart-topper, “Wild One,” Hill was welcomed to the stage for 1994’s Elvis Tribute Concert at The Pyramid in Memphis, Tennessee.

She, along with other notable greats like Tanya Tucker, Billy Ray Cyrus, and Jerry Lee Lewis – performed his greatest hits and truly made this concert something to remember.

Brought forth to honor the unforgettable musical legacy of one of the most famous and innovative performers in the history of music, this tribute concert blended irrefutable talent with classic songs in a whole new way.

Singing Elvis’ beloved 1956 hit “Tryin’ to Get to You,” Hill went way back to her country roots as a Mississippi girl and gave the song a remarkably good makeover – full-throttle twang and pristine notes meant it had the whole crowd jamming out!

Presley recorded this song for the first time in 1955 as part of his then-unissued Sun Records’ sessions. He would go on to record five different versions in total, but just the second recording was released during his lifetime.

Hill, who grew up with a deep fondness of The King and his stunning musical legacy, has performed many of his songs throughout her career as one of the most famous female singers in country music – but this performance will always stand out as one of the best.

Leather-Clad Faith Hill Delivers Growling Tribute To Elvis
She belts this song with passion and might – a performance that would have made Elvis proud! https://t.co/Yu5xwOvAE8 pic.twitter.com/IUHNqB2jrh

Watch Faith Hill’s twangy, thrilling tribute to The King below – and let us know what you think of her performance in the comments!

Do any of you remember watching this live on TV or attending in person?