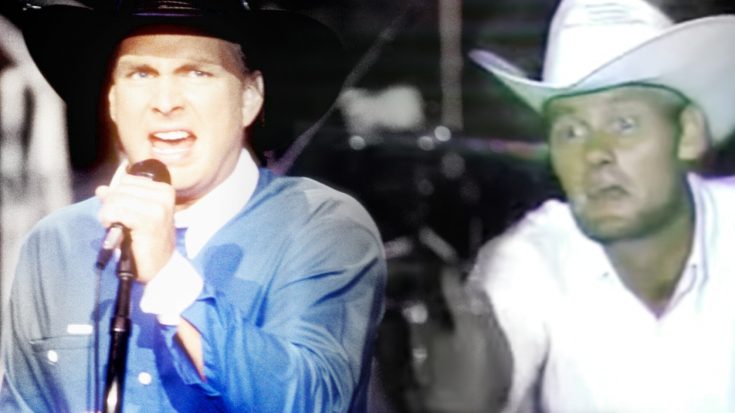 In a rare 1990 video of Garth Brooks performing at the Black Gold Festival in Hazard, Kentucky – the country star put on a memorable performance of the classic Bob Seger tune, “Get Out Of Denver.” Even more memorable was one fan’s wild reaction to the jam!

The Black Gold Festival draws in a very diverse crowd to celebrate the coal mining industry that has been dubbed as “Kentucky’s black gold.” With the amount of music, crafts, food and events – it is no wonder that some guests get a little bit too enthusiastic. The tiny town of Hazard has put itself on the map over the years and shown that small towns in the U.S.A really know how to party!

I have vivid memories of the Black Gold Festival from my childhood. This was the one in 1982. I wonder if I was in there somewhere? #blackgoldfestival #coaltown #hazardkentucky #1980s #smalltown #kentucky

One such partygoer was the nameless man who went absolutely nuts when Garth Brooks picked up his guitar and began playing Bob Seger. We’re not sure if it was because he loved Garth, Bob, or just had one too many that night – but his crazy antics are something you won’t easily get out of your head.

At one point, the hyper fan even gets up on stage for an attempt at Elvis‘ famous leg shakin’ dance moves – only to quickly fall back off stage as he struggled to stay upright.

Throughout all the madness going on, Garth gave a flawlessly energetic performance of Bob Seger’s “Get Out Of Denver.” The 1974 classic was on Seger’s Seven album. It talks about two lovers on the run from the police and highlighted one of the time’s greatest classic cars – a 60s Cadillac that was burning rubber during the couple’s escape – going 120 miles per hour!

The combination of festival food, beer, Garth Brooks and Bob Seger proved to be too much for the Kentucky boy to handle. At the time, Brooks might have been a little worried about what the guy would do next – but looking back, everything involved made for a once-in-a-lifetime performance you won’t soon forget.

Watch the full video below – but make sure you’re sitting down. This guy’s hysterical antics aren’t for the faint of heart.