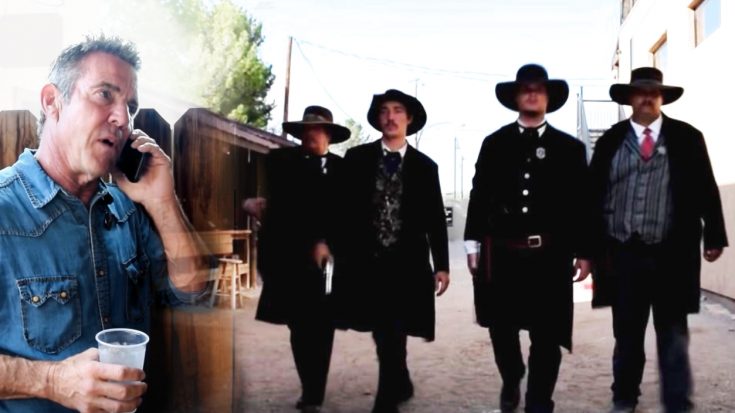 The town of Tombstone, AZ is best known for the famous Gunfight at the O.K. Corral which has been immortalized in movies like Tombstone and Wyatt Earp. So when the police lip sync challenge went viral, the Tombstone Marshals knew just what to do… and who to recruit.

The gunfight at the O.K. Corral was a shootout between lawmen and the outlaw group known as “The Cowboys.” It only lasted 30 seconds but to this day is regarded as one of the most famous Wild West shootouts.

On “The Cowboys” side there was Billy Claiborne, Ike, and Billy Clanton as well as Tom and Fran McLaury. Opposing them was town Marshal Virgil Earp, Morgan Earp and Wyatt Earp who recruited Doc Holliday on their side despite his battle with tuberculosis. The battle has been glorified in several movies including Frontier Marshal (1939), Gunfight at the OK Corral (1957), Tombstone (1993) and Wyatt Earp (1994).

In the 1994 rendition, the fan-favorite Doc Holliday was played by none other than Dennis Quaid.

So when the Tombstone Marshals got in on the lip-sync actions, they knew they needed to call up an old friend to help them out. The video opens with four Marshals standing around a desk trying to figure out a way to reduce the rising crime in their town. The Marshal, Bob Randall finally decides that he needs to “give my buddy Dennis a call and see if he can give us a hand.”

On the other line, Dennis Quaid answers the phone and reluctantly agrees to help out. He tells Bob that “I’m not really a Marshal, I just play one on T.V.” As he gives in, the men decide to meet at the saloon which Quaid insists Bob knows about.

After a quick Saloon meeting, the guys get ready for the big event and Toby Keith‘s “Beer For My Horses” can be heard playing in the background. Cut to the next scene and four gun-slinging men – resemblant of the Earps and Doc Holliday – fire off vintage revolvers in the street.

The video continues with the present-day Marshals waking and riding horses down the street lip-syncing Toby Keith and Willie Nelson‘s 2003 hit song. Keith and Nelson’s music video for the song was a cinematic hit and was even nominated for “Video of the Year” by the Academy of Country Music.

While Toby Keith doesn’t make an appearance in the Marshal’s video, the boys hit up some monumental places while chasing down bad guys. Their video definitely reminds us of the town’s rich history – and our favorite movies. Even the O.K. Corral made an appearance!

The guys seemed to take the line, “When the gun smoke settles we’ll sing a victory tune, and we’ll all meet back at the local saloon“ very seriously and can be seen enjoying a few drinks with some special guests – can you spot them?!

Dennis Quaid makes his own appearance, helping the boys lip-sync the song and enjoying a few cold ones throughout the film. Watch the full video below for all the fun, singing and action-packed high-speed chases!