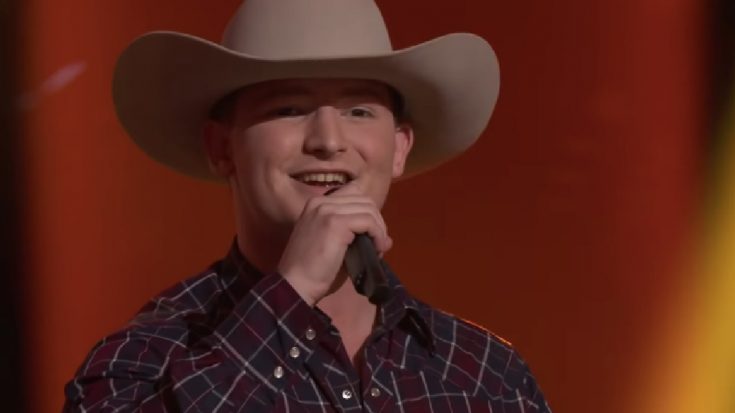 The Voice is lining up some impressive country music talent for its twentieth season. The second night of the show’s season premiere brought us a performance from 17-year-old Ethan Lively that lefts us all wondering why we don’t hear more George Strait covers on the show.

The Tennessee teen took the stage for his Blind audition looking the part in a cowboy hat and boots. When he started singing his voice confirmed that he is country through and through. His rendition of George Strait’s 1983 hit “You Look So Good In Love” had coaches Blake Shelton and Kelly Clarkson singing along, but it took some time for a coach to turn their chair. Eventually Shelton turned his chair, much to Lively’s delight as he couldn’t refrain from smiling as he finished his performance.

It’s a nice break when I don’t have to put up a fight with the other coaches! You’re right at home on Team Blaque Ethan! 😉

When introducing himself to the judges, the deep-voiced singer said that he’d been singing since he was three and discovered his rich voice around the age of 14. Blake pointed out that Ethan was only 7-years-old when The Voice premiered in 2011, and praised his choice of song for the audition.

“I don’t know why people don’t do more George Strait songs when they audition for this show,” Blake said. “You’ve got an interesting voice because it’s sandpapery. Your speaking voice is almost bigger and louder than your singing voice.”

Coach Kelly agreed, calling the singer a “tender cowboy” and encouraged Lively to stay true to himself throughout the competition. “You are so charming, and I hope you stay exactly how you are.”

Watch Ethan Lively‘s full audition in the video below and let us know what you think!