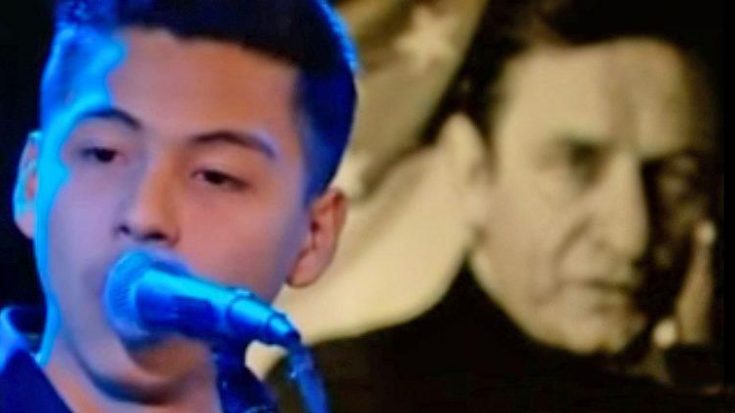 A 15-year-old boy was given his moment in the spotlight when his deep vocals and familiar talent left folks breathless!

Vince Mira was discovered “performing for spare change on a street in Seattle,” Good Morning America host Robin Roberts explained before kicking off their special feature on the musical prodigy that could perhaps be the vocal twin to country icon Johnny Cash.

Upon his rise to fame, the then 15-year-old was given the opportunity to record a variety of Cash’s hits with the legend’s original bandmates, serving as a major honor and accomplishment for a young boy with such incredible talent.

Upon being asked about his uncanny vocal resemblance, Mira admitted, “I never sounded like this. I never had a deep voice until I moved to Washington. That’s when “the change” happened.“

He continued to talk about his love for the movie Walk The Line (an autobiographical film of the life of Johnny Cash) and explained that he would find himself singing along to Cash’s portrayer Joaquin Phoenix. It was then that he soon became aware of his deep vocal range, using this rare gift to his musical advantage!

Johnny Cash’s Isolated Vocal Track For ‘Ring Of Fire’ Sizzles With Sound
Without the instruments, "Ring of Fire" sounds drastically different than the song you're used to. https://t.co/YRzqUvN7qZ #JohnnyCash pic.twitter.com/T8p5iRhOrB

Giving the crowd a taste of his vocal strength, Mira graced his crowd with a fiery performance of Cash’s timeless hit “Ring Of Fire”.

“Love is a burning thing/ And it makes a fiery ring./ Bound by wild desire/ I fell into a ring of fire,” he boldly sang.

The audience was floored by the young man’s talent well beyond his years! During his final verse, the crowd erupted in applause as they admired the skilled boy and his bright future ahead.

Be sure to check out his performance below and let us know if you heard the resemblance!