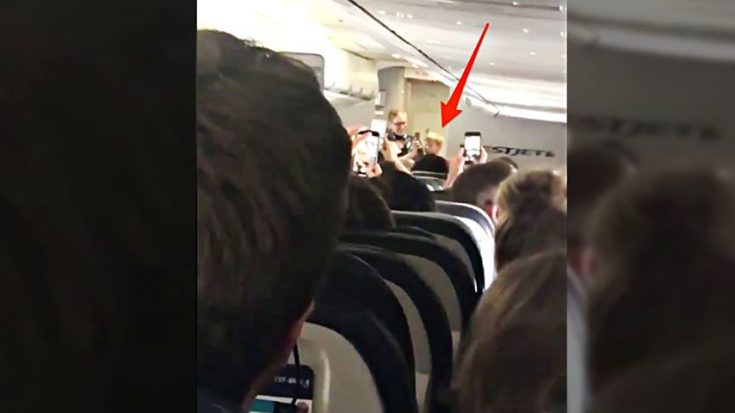 Listen! Up in the sky! It’s a bird! It’s a plane! It’s a yodeling youngster!

Passengers aboard a WestJet flight were rewarded with unexpected premium in-flight entertainment free of charge! Belted in their seats and preparing for the journey ahead, travelers took note when it sounded as if an announcement was about to occur.

Imagine their surprise when instead, a Hank Williams–sounding voice erupted over the intercom and spilled throughout the plane. The reach for cellphones to document the event was fast and furious.

Before the aircraft could barely prepare itself for the uplifting entertainment that was about to occur, yodeling Walmart star Mason Ramsey had assumed the vocal identity of the late Hank Williams, singing the legendary country western star’s first major hit from way back in 1949.

Minus his cowboy hat, the 11-year-old star yodeler may have been mistaken for just one of many passengers on the crowded aircraft. But, once Ramsey opened his mouth, there was no doubt those lucky listeners were in for the ride of a lifetime, not to mention entertainment they could talk about for years to come. They were “this close” to this young singer who’s experienced a meteoric rise to fame. To enhance the story, they might include the fact they were breathing the very same air as the star.

Standing next to a uniformed flight attendant, Mason seemed at ease performing on the makeshift stage. Unaccompanied by nothing but the feeling of excitement that hung heavy in the air, you could close your eyes and imagine Hank Williams performing this song he revised and made famous when the odds were stacked against him.

In some ways, the tale of the two performers intertwines there. Both put their time in up front and suddenly took off after finding a way to get noticed. The huge difference, of course, is Mason started hitting the big times at age 11. Hank was almost 24.

“Lovesick Blues,” anointed by some as William’s saddest song, became his signature song. The iconic singer added flourish to the blues and his incomparable yodeling turned a standard heartfelt song into a performance. Williams sang with meaning dripping off every lyric.

Now, listen to Mason Ramsey sing this Hank Williams Classic around 30,000 feet in the air. As one fan expressed: “So, this is what flights to heaven are like…”